Love and hope in the time of Ebola

Love and hope in the time of Ebola 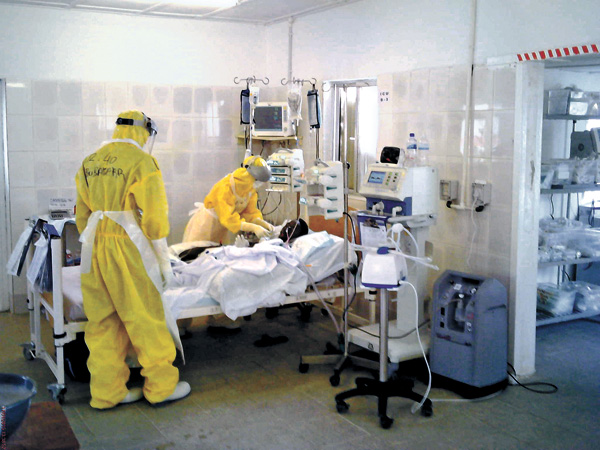 Members of Korea’s medical team sent to Sierra Leone to help curb the Ebola outbreak operate on an infected patient. Provided by the Ministry of Foreign Affairs

When health authorities announced late last year that local medical personnel will be sent to Sierra Leone to help combat the deadly Ebola virus, the first time the government has ever made such a decision, their message to the press was loud and clear.

Downplay the story and don’t identify any of the doctors or nurses.

“We gravely fear that they, their families and affiliated organizations will all be harmed” by excess publicity about their mission, the Ministry of Health and Welfare said in a press release.

The move was intended to protect those involved in the mission as well as to prevent an incident similar to that in 2009, when the country was on high alert over the spread of the swine flu virus.

At that time, a group of parents protested a young girl’s attendance at school because her father had treated infected patients at a college hospital and they feared she could be an agent of transmission for the virus.

Heeding the warning from the Health Ministry to not report anything personal about those on the team until they return from their mission, JoongAng Ilbo set out to collect email interviews from a few who had arrived safely back to Korea following their assignment overseas.

The identities and names of those involved are withheld due to the sensitivity of the matter.

Those groups were then dispatched separately to Sierra Leone. The first team returned to Korea on Jan. 26, while the second will finish field operations next Friday. The third team wraps up on March 21.

Four people who participated in the first or second teams dispatched to Sierra Leone talked about their journeys. Won Do-yeon, an official from the Ministry of Foreign Affairs who accompanied them, also submitted a narrative.

The following are edited excerpts of those interviews:

A 20-something female military nurse on the first medical team

I couldn’t tell my parents. But once I did, I was surprised by how my mom reacted to my decision to go to Sierra Leone.

“I knew you’d apply [for the medical team]. But don’t you think a month will be too short? How about a year?” she said.

Thanks to her support, I was able to go without feeling a sense of guilt, but I later heard that she cried a lot after reading malicious commentary about the team online. She told me she couldn’t even tell my relatives about my trip out of fear that they would blame her for not stopping me.

But that didn’t last long.

Now that I’m here and safe, she asks whether she can brag about me.

A 20-something female nurse on the first medical team

Once I started treating patients in Sierra Leone, I realized I was standing on a fine line between life and death. Of the 30 patients I dealt with, I saw some who were elated to have received successful treatment, and others who were devastated to have lost their entire families after successfully winning their own battle against Ebola.

When a patient gets discharged from the hospital, all the doctors walk him or her out of the building, something like a ritual celebrating Ebola’s defeat. That small gesture of kindness is all we could do, really, but for the patients and their families, our treatment was understood as having provided a second chance at life.

It’s then when I felt the exhilaration of working on an emergency relief team.

My plane leaving Sierra Leone was saturated with familiar faces, most who were on the same mission as me, only from different countries. Their hair was all tangled, and skin sunburned, but I sensed their facial expressions were much brighter.

As someone who was on the mission, I wanted to give them a thumbs-up.

A 30-something nurse on the first medical team

Even after I was selected to be on the medical team, I wasn’t sure whether I should go. But my dad seemed more aggressive. He told me he wondered whether I was going to apply after hearing about the open recruitment in the news.

When I returned from Sierra Leone and was put in a hospital for quarantine, my dad visited me with a bouquet of flowers. Full of laughter, he told me he was proud of me. He couldn’t hug me, though, due to the 21-day incubation period.

A 30-something female military nurse on the first medical team

Dec. 30, 2014: Just when I thought I had everything under control, what I hoped would never happen to me happened to my colleague.

I was about to change shifts after finishing my afternoon work when I saw the chief of the medical team talking with the head of the support group. Both had stern looks on their faces, and instinctually, I knew something was wrong.

Not long after, I heard that my colleague had been gathering blood from an Ebola patient when [his or her] glove got ripped off and the needle brushed the upper part of one finger. The mission leaders had been discussing whether to send [my teammate] to an overseas treatment center.

[Authorities did not reveal whether the team member in question was male or female.]

After consoling my colleague, I waited a very long anxious night, afraid that I might get infected by the virus and that I might never see my teammate again.

The next day, Korea’s Ministry of Foreign Affairs decided to send my colleague to a hospital in Germany, and informed all of us about the emergency measures the government would implement in case we come in contact with Ebola.

Understanding how a hypothetical situation can so easily turn into reality, that was when I first realized that what we’re doing in Sierra Leone was no simple task, and that we are putting our own lives at risk.

The news [concerning my colleague] immediately spread throughout the treatment center in Sierra Leone. And when the foreign medical staff would ask me about my partner’s condition, my eyes would well up every time.

Regardless of nationality, we were all in it together. I may have been looked down upon in the beginning because I’m young, but soon after, the foreign medical workers said they respected me for being so enthusiastic about treating the patients.

I lost my chance to say goodbye to my teammate before [he or she] left for Germany due to work. But every day, I kept my ears open for good news.

When I finally heard that the test results came back negative for Ebola, I was so thankful.

As time passes, we will all walk different paths in our lives. But we will never forget the angst, the restlessness and then the relief that we felt for our teammate.

A male military doctor on the second medical team

There was this girl, only 7 years old. Despite her critical condition, she refused to eat or drink, and simply lied in her bed all day.

Then, one day, a miracle happened. A female doctor from South Africa showed the girl a bottle of pink nail polish, and prompted her to sit up and hold her hand.

Ecstatic to see her moving, I ran to bring back chocolate cookies in the hopes of feeding her. When I saw her finally eating, I just knew she would live for herself.

The patient, the South African doctor and me - a military doctor - seemed to have nothing in common, but there was something in that tiny treatment center that held us together.

One of my male patients, who was stocky in build, also comes to mind. He was so patient, and even with a gigantic intravenous drip in his arm, he didn’t seem a bit annoyed.

But what shattered him one day was a phone call. I couldn’t hear the details, but after learning that it was from his daughter, I could only imagine what it was about.

Parents are the same everywhere. I promised I would take good care of him so his family wouldn’t have to grieve any further.

Won Do-yeon, a Ministry of Foreign Affairs official who led the support group

When we first arrived in Sierra Leone, all they knew from Korea was football player Park Ji-sung, because British football matches were playing on TV. But when we left Sierra Leone, that changed.

Those who worked at the treatment center or who were cared for by the local staff now think of the team as an emblem of Korea.

Those on the emergency relief unit can infer what people back home might think of them after reading the commentary below online articles. But thankfully, those comments have become much more positive, and it’s that encouragement that boosts their spirits.