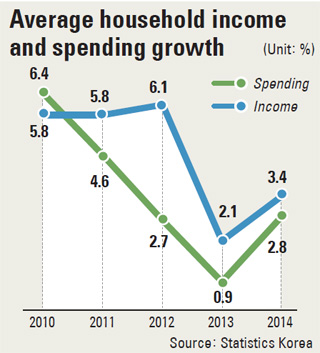 Though income increased last year, people spent less despite the low inflation rate, largely due to concerns over economic uncertainties coupled with dampened consumer sentiment after the Sewol ferry tragedy in April.

According to a report by Statistics Korea released Friday, the average monthly household income grew 3.4 percent last year over 2013 to 4.3 million won (about $4,000). At the same time, average monthly spending saw slower growth of 2.9 percent, to 3.36 million won.

The study was limited to households with two or more members in urban areas in which the breadwinner of the family was not an entrepreneur.

According to the report, the income increase is mostly due to rising transfer income. Last year, income from government benefits grew 4.2 percent over 2013 after the government in July started to provide a monthly pension payment of up to 200,000 won for senior citizens who are 65 years or older and who are in the low-income household category. The government pension was part of President Park Geun-hye’s campaign pledge to improve the lives of struggling senior citizens.

Monthly living expenses grew 2.8 percent to 2.55 million won a month, the sharpest increase since 2011. The report attributed the rise to increased spending on transportation, which expanded 8.6 percent thanks to purchases of new cars. Spending on leisure and entertainment grew 5.6 percent and consumption of durable goods expanded 5.5 percent. However, households have been cutting back on non-essentials, including telecommunication bills, water bills, alcohol and cigarettes.

Non-living expenses grew 3 percent to 805,000 won per month on average partially due to an increase in health insurance products and pension payments.

The tendency of households to spend less was clearly shown in the average propensity to consume, which dropped for the fourth consecutive year and was at its lowest since the agency started collecting relevant data in 2003.

The average propensity to consume is calculated by dividing living expenses by disposal income and multiplying by 100.

Last year, average propensity to consume was 72.9 percent on average, 0.4 percentage point lower than in 2013. This indicates that many households are saving the remainder of their money after paying living expenses.

As a result, the ratio of households that are in debt has shrunk to its lowest point since 2003. That ratio as of last year was 22 percent, 0.5 percentage point lower than the 22.5 percent recorded in 2013.

The study showed that by income level, people in the lowest tier saw the biggest increase in income, but they spent less. Among the five income brackets, income grew 5.6 percent at the lowest level, sharper than the other income groups, which grew at a rate of between 2.2 percent and 3.6 percent. But while people in the top income levels saw their income grow as well as their spending, which was up 4.4 percent year-on-year, the lowest tier cut back on spending, as it dropped 0.1 percent.