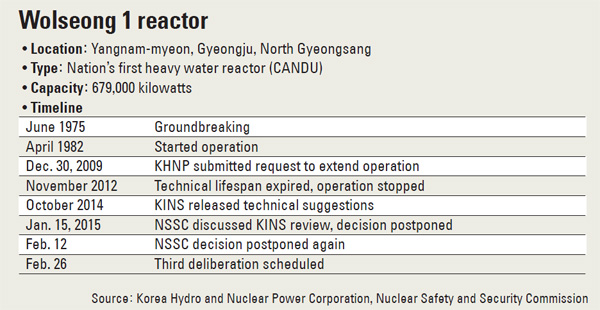 After 13 hours of deliberation, Korea’s nuclear authority failed to make a decision late Thursday night about whether to restart operations at the nation’s second-oldest nuclear reactor, Wolseong 1.

It was the second time the Nuclear Safety and Security Commission (NSSC) has delayed concluding the issue, failing to play its role as mediator between pro- and anti-nuclear power groups.

All nine NSSC commissioners and seven independent nuclear safety experts were present at the authority’s office in Gwanghwamun, central Seoul, on Thursday morning to announce that the group will meet again on Feb. 26 to attempt to reach a decision.

“The meeting covered various safety issues, including the reactor’s safety maintenance status and the risk-management system in place in case of natural disasters,” the NSSC said in a statement released Thursday night after deliberations ended at 11 p.m. “However, we concluded we will need more time to review the safety assessment results [based on technological suggestions submitted by experts].”

The NSSC’s failure to make a decision is due to diverging expert opinions between the pro-operation extension group - mostly made up of researchers at state-run research institutes - and anti-extension experts from civic groups and universities.

The pro-extension group argued to the commission that the reactor is safe enough to operate and will contribute to the nation’s supply of cheap electricity, while the anti-extension group says reactors that are 30 years old should stay closed to prevent nuclear accidents.

The Wolseong 1 reactor, located in Gyeongju, North Gyeongsang, was imported from Canada and started operating in 1982, making it the nation’s second oldest. It has a capacity of 679,000 kilowatts, but its operations have been suspended since 2012 because it reached the end of its estimated life span of 30 years.

In 2009, the Korea Hydro and Nuclear Power Corporation (KHNP) applied for an operation extension. The state-run company spent about 560 billion won ($510 million) to replace old parts and install additional safety features at the facility.

If the NSSC approves its extended operation, the reactor can operate safely for a decade, according to KHNP.

The Korea Institute of Nuclear Safety (KINS), a state-run research institute, submitted its technical suggestions at the NSSC’s plenary session in mid-January to approve the extension.

“Wolseong 1 reactor met safety requirements in all categories -the reactor itself, network systems and nearby facilities, as well as stress durability tests against any emergencies,” the KINS said in a report submitted to the NSSC in October. It said the reactor’s parts were certified for quality and the risk response system would prevent any accidents caused by natural disasters like the Fukushima disaster in 2011.

However, the independent expert group submitted 32 alternate solutions to restarting the reactor on Thursday. It argued against the KINS report, saying that the state nuclear authority can’t rely on the institute’s analysis of the Wolseong reactor’s ability to withstand natural disasters.

The group also argued that there is no reason to continue to operate old reactors because the nation’s power supply will be sufficient without them.

According to a report released Monday by the National Assembly Budget Office, the Energy Ministry’s electricity supply plan for the next five years says the two out-of-date reactors are not needed to maintain the stable power reserve level of 15 percent.

Lee Un-chul, chief regulatory officer of the NSSC, said at a National Assembly deliberation last month, “The commission doesn’t have a fixed deadline for this decision. We will take enough time until we reach a conclusion that’s as convincing as possible in terms of safety.”

The committee is also reviewing experts’ advice on whether to extend operations at the Gori 1 reactor for a second decade. Opened in 1978, Gori 1 was the nation’s first reactor and is currently in its first extended operation period, which ends in July 2017.