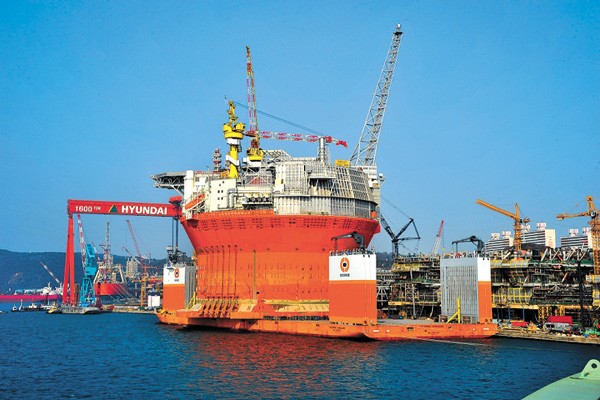 The Goliat FPSO made by Hyundai Heavy Industries is prepared to be delivered. Provided by the company

Hyundai Heavy Industries, Korea’s top shipbuilder, announced Friday that it has finished building the world’s largest one-million-barrel capacity cylindrical floating production, storage and offloading (FPSO) facility after about three and a half years of construction.

The company won the bid to build the Goliat FPSO in 2010 from Norway’s Eni Norge with a $1.16 billion contract, putting HHI in charge of engineering, procurement, construction onshore commissioning and transportation. The FPSO left HHI’s dockyard in Ulsan on Friday headed for Norway.

The FPSO is 112 meters (367 feet) in diameter, 75 meters tall and weighs 59,000 tons. The shipbuilder said that the FPSO will be used at the Goliat oil field, which is 85 kilometers (53 miles) northwest of the Hammerfest region in Norwegian waters in the Barents Sea.

The shipbuilder said that since the FPSO has to be built in compliance with Norsok standards and fitted for Arctic conditions, construction took longer and was started in June 2011.

HHI accounts for 60 percent of the global FPSO market and has built nine FPSOs that can hold more than two million barrels of oil. The company has a special FPSO dockyard that is 490 meters long, 115 meters wide and 13.5 meters tall with two cranes that can lift 1,600 tons.

At a board meeting on Friday, HHI decided that its affiliate Hyundai Energy and Resources will be managed by Hyundai Corporation. It is the first restructuring move made by the shipbuilder since CEO Kwon Oh-gap took charge in October.

Hyundai Energy and Resources was established in 2011 as a resource developer, managing Hyundai’s mine and oil field assets.

The shipbuilder is currently going through difficult times. On Thursday, HHI said that it had taken on a net loss of 2.21 trillion won ($2 billion) last year, a huge dive from the 146.3 billion won in profit it made in 2013.

Revenue was down 3 percent year-on-year to 52.58 trillion won, and it recorded its worst operating loss ever, at 3.25 trillion won, after falling into the red from last year’s profit of 802 billion won. HHI said the poor yearly performance was due to rising costs in shipbuilding and offshore plants.

The company is also facing a court case with 10 employees regarding a dispute over base wages.

If the Supreme Court upholds the lower court’s decision, HHI will have to pay an estimated 629.5 billion won to its 26,000 employees.