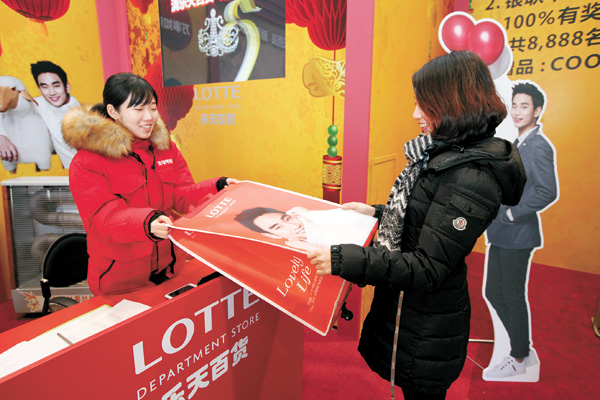 A customer receives a shopping bag with a photo of Korean actor Kim Soo-hyun at Lotte Department Store in Seoul. Local retailers want to bring in Chinese tourists during the Lunar New Year holiday next week. By Choi Seung-sik

In early February, a rumor that Korean actor Kim Soo-hyun from “My Love From the Star” was scheduled to appear on the Chinese dating game show “Feichengwurao,” or “You Are the One,” drew excitement from users of the country’s social media services Weibo and WeChat.

The rumor spread after the popular Chinese show announced that a “Lotte oppa” (oppa meaning favorite male star in Korean) will appear on the show on Feb. 7, while displaying a photo of Kim, a model for Lotte Department Store, on a screen in the background.

But the “Lotte oppa” who showed up was not Kim - disappointing many Chinese Hallyu fans. He was a regular Korean guy named Jeong Yeol, a member of Lotte Department Store’s global marketing team.

“We will give a bunch of benefits especially to you girls, so please visit Lotte when you get a chance to travel to Korea,” Jeong said in fluent Mandarin, giving out his name card and promotional tumblers to 24 female contestants. Jeong even sang a K-pop song and showed his dance skills.

Putting Jeong on the hit Chinese TV show was part of Lotte’s marketing strategy to attract 126,000 Chinese tourists to the department store over Lunar New Year next week. Lotte’s goal is to create special promotions to win over tourists who are familiar with Korea.

“At this point, Chinese people may be tired of Korea,” said Koo Dong-wook, head of the global marketing team at Lotte Department Store. “In order to make youker [Chinese tourists] loyal visitors of Korea with new things to see each time, we have to look into their style and their hearts. Simple marketing strategies don’t work on visiting customers anymore.”

In fact, Chinese tourists are not very satisfied with their visits to Korea.

According to a survey of tourists from 16 countries by the Korea Culture and Tourism Institute, Chinese tourists ranked 14th for satisfaction.

“Because China and Korea are so similar in cultural aspects, youker may be less satisfied after traveling to Korea,” said Choi Kyung-eun, a research fellow in charge of Chinese tourists at the institute. “Now is the time for us to come up with a solution to boost the quality of their travel experience instead of attracting more tourists.”

At Lotte Department Store’s main branch, spending by Chinese accounted for 17.2 percent of the branch’s total sales last year, a big jump from 5.1 percent in 2012.

But year-on-year sales growth from them has shrunk from 152 percent in 2012 to 70 percent last year. At the same time, Chinese tourists’ spending is becoming more important to retailers due to Korea’s economic slowdown.

The slow sales growth led Lotte to start a separate marketing team for foreign shoppers in October, which came up with the idea to put Jeong on China’s No. 1 rated show.

But Lotte is not the only one looking for new ways to draw in customers.

However, the Chinese tourists who the JoongAng Ilbo met in Myeongdong, central Seoul, on Friday said that shopping is not the only thing they want to do in Korea.