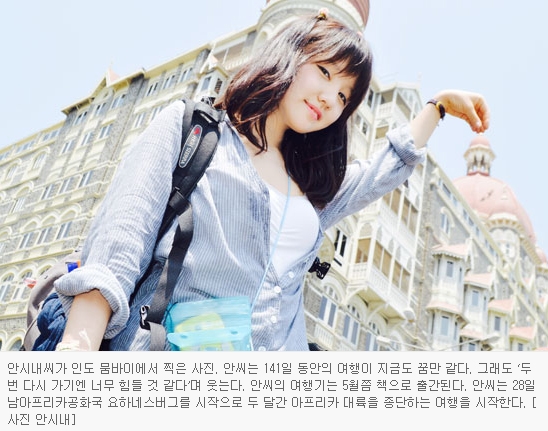 An Sin-ae travels in India last year. The 22-year-old college student, who traveled the world for 141 days on 3.5 million won (about 3,200 dollars), has nearly 24,000 followers on Facebook. Provided by An Sin-ae

After An Sin-ae boarded her flight to Kochi, India, last year, she spent the next three hours crying.

The college student, now 22 years old, was about to embark on an ambitious world trip for which she had meticulously planned.

She took a break from school, and struggled through all kinds of part-time jobs to earn enough money, doing everything from waitressing, to babysitting, to working as a receptionist at a bank. But An, a slight woman who is just 150 centimeters (5 feet) tall, suddenly felt panicked over not having outlined an itinerary.

Before, she had been consumed by the thought of fearlessly crossing international borders and set a goal to live for at least a year with no rules and no plan. It was a vow of sorts to live absolutely spontaneously.

And so An worked day and night to earn enough money for her travel expenses, collecting 10 million won ($9,000) by the end. But before long, more than half of that was funneled to her parents, who were dealing with their own staggering financial circumstances.

With only 3.5 million won on hand when arriving at the airport last March, An consoled herself, promising that she would return to Korea once her pockets ran empty.

“The first day I arrived in India, I purchased a knife,” she recalled. “I heard the country was dangerous, so I held it tightly wherever I went.

“But a few days later when the owner of my guesthouse said it was me who looked intimidating, I finally let it go.”

It was then that she really began to see the world clearly.

The Indian woman who nursed her back to health in the Himalayas when An came down with altitude sickness, the Egyptian boy who handed her a postcard in the slums, and the police officer who offered her tea and kept her company when she mistakenly arrived at an unfamiliar village were just a few of the acquaintances she met after lowering her guard.

But all the while trying to open her mind to the world before her, An stuck to the three principles of traveling, which are to never wander around late at night alone, to study about a country’s culture beforehand and to write a personal guidebook.

When it came time for her to return to Korea, her parents were there waiting for her at the airport, along with thousands of local fans who had read her travel posts on Facebook and followed her journey.

What began as a means to relieve her worrying mother and to subdue the loneliness of being alone in the end resulted in mega fandom, so much so that she is often recognized on the streets. “I’ve come to love myself for who I am,” An said, responding to what she had learned from her world travels.

And to deliver that message to everyone else, she has also accepted numerous offers to serve as a guest speaker. Her autobiography will be published in May.

In preparation for her next trip to Africa on March 26, An said she was busy collecting information about the continent.

Her expenses will be covered by multiple sponsors, whom she will reimburse by using part of her book earnings to donate to African charitable organizations in their names. “I’m actually freaked out. I think I may have been too boisterous about my new journey,” she said with a laugh.