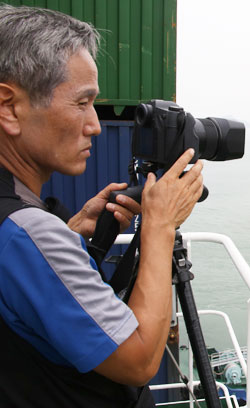 When Jo Choon-man was a little boy, his dream was to become an engineer - an ambitious goal for someone like him.

Jo was born in 1956 into a tenant farmer’s family, and after completing elementary school he began working in the fields to help his parents. At 18 he got a job at a factory, a small-parts supplier under Hyundai Heavy Industries in Ulsan.

His first assignment was to cut iron plates, though he also learned how to weld as he adjusted to his position.

Four months later, Jo saw his completed work on a ship so huge he couldn’t even recognize where the iron plates he had cut had been placed. 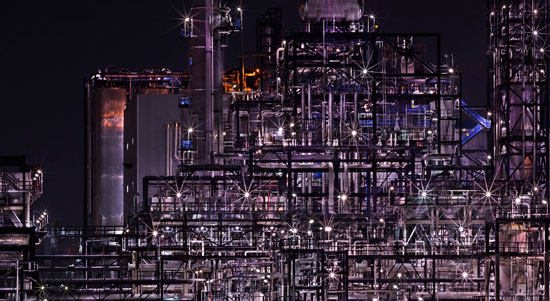 “It was an oil tanker 53 meters wide with a 260,000-ton capacity. It was so impressive that I still remember its size precisely,” the 59-year-old said.

It was that sense of lingering awe that has inspired him for the past two decades to become a industrial photographer, photographing factories, steel parts and industrial scenes.

The imagery takes on different themes depending on the sentiment. While most industrial photos depict everyday scenes - iron mold poured out of a smelting furnace or a factory worker’s smile - Jo’s images focus on the aesthetics of the machinery and the facilities.

“That attachment or awe that I feel toward industrial scenes” inspired me to photograph them, Jo said when asked what made factories beautiful.

His photos have been featured in several exhibitions, most recently in “Space Life,” which runs until May 17 at the Ilmin Museum of Art in Gwanghwamun, central Seoul.

The show puts as much emphasis on modern life as it does on outer space, through somewhat paradoxically, Jo’s factory photos are the most cosmic among all the pieces exhibited.

Over his lifetime, Jo has traveled as far as the Middle East to work as a welding operator. He left for Saudi Arabia on the same day his son was born, and eventually came back ill - having acquired ulcers in the stomach and small intestine.

His next destination was Kuwait, where he lost partial hearing when hot slag from welding entered his ear canal.

With the money he collected in that time, Jo became self-employed in the 1980s, opening a small supermarket.

He also continued studying for the national school diploma qualification exam, while also running his own business.

Those efforts led him to study photography in his 40s at Kyungil University in Daegu.

Jo took his first photograph in 1993, when he still was welding in Ulsan.

He also took photographs of his neighborhood in Bugok-dong, Ulsan, and of the factories that opened after resident villages were razed to the ground.

“I couldn’t really focus on the dignity and beauty of production facilities when I had to focus on welding pipes. But at one point, I started realizing the aesthetics of those scenes,” he recalled.

But his work wasn’t without its difficulties, and Jo continually suffered from illness. Local workers were also typically wary of his attempts to photograph them in their working environment.

“Cases like mine [in which I suffered health problems] happen quite frequently,” Jo said. “I used to work more than 700 hours a month when I was working in the Middle East. And it wasn’t just me. Everyone there worked like that.

“Because we did our best, our work developed to the next level,” he added. “Same with my life: It has flown by like that.