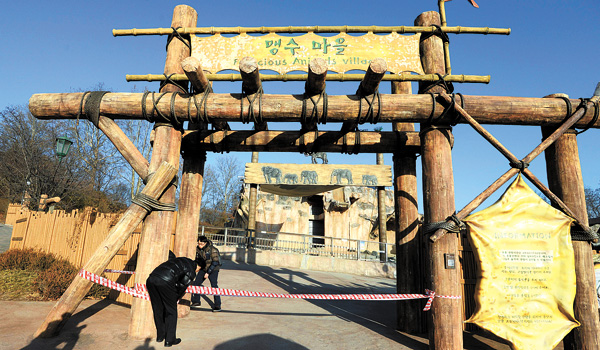 Officials from Seoul Children’s Grand Park install a no-trespassing sign at the entrance to the zoo’s ferocious animals exhibit on Friday after a zookeeper there was mauled to death by two lions a day earlier. [NEWSIS]

An incident Thursday in which a zookeeper was mauled to death by two lions has led to growing calls for increased safety measures.

Both lions, which were supposed to be locked up, were discovered wandering around the body, said another zoo worker surnamed Lee, who first came upon the scene at the enclosure, which measures 374 square meters, about 4,000 square feet.

In CCTV footage examined by the police, Kim appeared on screen alone after taking part in the zoo’s wild animal action development program, which is conducted two or three times a month to help exercise animals’ natural instincts.

During those exercises, workers typically throw raw meat or toys to the animals in their natural enclosures.

Police said Kim was working by himself and remained in the enclosure to clean it without realizing the lion cage was unlocked.

Zookeepers are advised to work together in teams when managing wild animals.

However, there is no safety manual specifically for Seoul Children’s Grand Park, according to the Seoul Metropolitan Government.

“Because there are only two people who manage wild animals, the zookeepers have to work alone from time to time because of differing vacation schedules,” said Ahn Chan, who heads Seoul Children’s Grand Park.

Kim’s counterpart was on vacation on the day of the accident.

The Seoul Metropolitan Government’s safety manual was written up in 2013 when another zookeeper died after he was bitten by a Siberian tiger at the Seoul Zoo in Gyeonggi.

The zookeeper was cleaning the animal’s enclosure by himself.

The city government’s safety manual for zoo employees requires keepers to work in teams to handle wild animals, carry radio transceivers to communicate with employees outside of an enclosure and have safety equipment available.

However, In Young-ju, who heads the animal breeding department at the facility, said Seoul Children’s Grand Park does not necessarily follow the manual, which was designed around the Seoul Zoo.

“We have our own safety manual, which was made according to our own circumstance,” In said. “Every zoo has a different manual; we didn’t have to follow the one the city government provided.”

The zoo has since closed down the enclosure where the accident occurred and has quarantined the lions that attacked Kim.

In a press briefing Friday, the zoo said it will install alarms in each animal enclosure and provide self-protection devices, such as Tasers and pepper spray, to zookeepers.

Kim has worked at the zoo for 20 years, with three years of experience training wild animals.