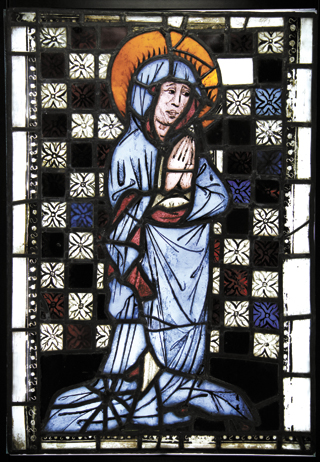 The early 15th-century “Stained Glass Windows with Virgin Mary and John the Evangelist.” Provided by the museum

Most Koreans are well aware of the beauty of Prague in the Czech Republic, but not many know that the country also takes extreme pride in its centuries-old glassware that has been globally renowned since the 18th century.

At “The Story of Bohemian Glass,” an exhibition currently underway at the National Museum of Korea in Yongsan District, central Seoul, visitors can explore the nation’s glass art, which spans from medieval times to the current age.

About 340 intricate glass pieces are on display at the exhibition, many of them flown from the National Museum, Prague, and the Museum of Decorative Arts in Prague.

“The Czech Republic was, in fact, not one of the early glassmakers,” Park Hye-won, the museum’s curator says. “The production of glass is believed to have started in Egypt and Mesopotamia in around 4,000 BC.” 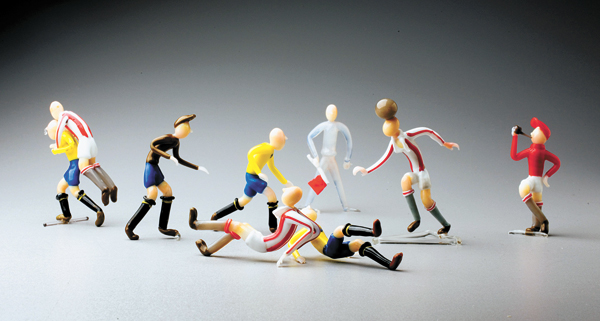 The oldest glass craft pieces found in the Czech Republic are from between 8 BC and 5 BC, mostly necklaces and decorations for cloths.

One thing that makes Bohemian glass art unique is its association with Christianity, according to Park. Stained glass is a good example of how the Czechs used their sophisticated craftsmanship to display their faith.

The 14th-century “Stained Glass Window with Apostle,” which is on display at the exhibition, is believed to be the oldest stained glass that remains in the Czech Republic today.

During the Renaissance period, Venetian glass was highly received in terms of technique and aesthetics. However, due to the extremely expensive costs of Venetian glass, countries across Europe produced copies, which also helped Bohemian glass develop its own techniques and styles. 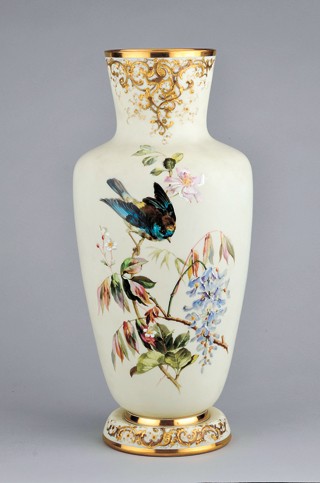 Crystals, which were not that costly yet are good for carving and engraving, and milk glass with an enamel decoration, which look like ceramics from Europe or China, were among them, museum official say.

“In the 19th century, the Czechs did everything they could with glass,” Park said, referring to the experimental spirit of the times. “Some items emulate the look of China’s wooden lacquerware and others bear resemblance to France’s precious stones.”

The curator added that another element that makes Bohemian glass noteworthy is how it is still flourishing today. In the last part of the show, where glass art created since the 20th century is on display, there are creative pieces such as the tiny “Figures ‘Czechoslovakia vs. Sweden’?” by Jaroslav Brychta (1895-1971), which depict a soccer match between the two countries.

Helena Koenigsmarkova, director of Museum of Decorative Arts in Prague, who was in Korea for a press event on Feb. 9, told journalists, “We hope [glass art] becomes one of the reasons that Koreans visit the Czech Republic and our museum in the future.”

“The Story of Bohemian Glass” runs until April 26. Admission is free. The museum closes every Monday. Opening hours are extended on Wednesdays and Saturdays to 9 p.m. Go to Ichon Station (lines No. 1 and 4), exit 2.