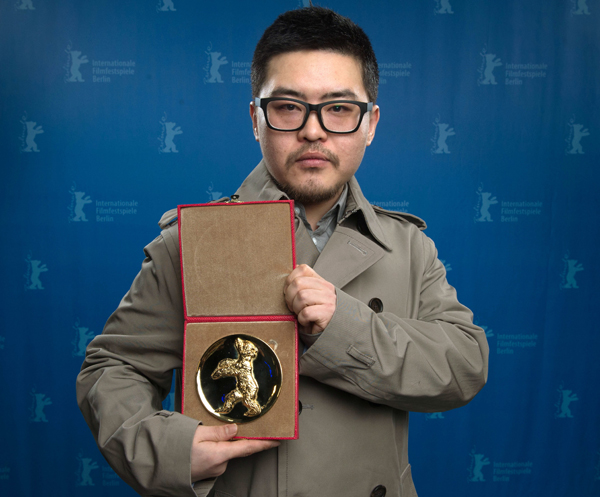 The film tells the story of a boy who has the power to resurrect the dead. But the people in his village who he resurrects curse and swear at him for bringing them back into their old lives.

The top Golden Bear prize for featured films went to Iranian dissident filmmaker Jafar Panahi’s movie “Taxi,’’ in which the director stars as a taxi driver talking to passengers as he navigates the streets of Tehran.

Panahi, 54, has been unable to leave Iran after his 2010 conviction on charges of “making propaganda’’ against the country’s ruling system. Authorities imposed a 20-year filmmaking ban on Panahi, but he has continued to make movies.

Panahi couldn’t be in Berlin but his niece, Hana Saeidi, was on hand for a tearful acceptance of the Golden Bear statuette. “I’m not able to say anything - I’m too moved,’’ said Saeidi, who herself appears in the movie.

“Limitations often inspire filmmakers to storytellers to make better work, but sometimes those limitations can be so suffocating they destroy a project and often damage the soul of the artist,’’ said the Berlin jury president, American director Darren Aronofsky. “Instead of allowing his spirit to be crushed and giving up, instead of allowing himself to be filled with anger and frustration, Jafar Panahi created a love letter to cinema.”

The grand jury prize, which comes with a Silver Bear statuette, went to Chilean director Pablo Larrain’s movie “The Club.”