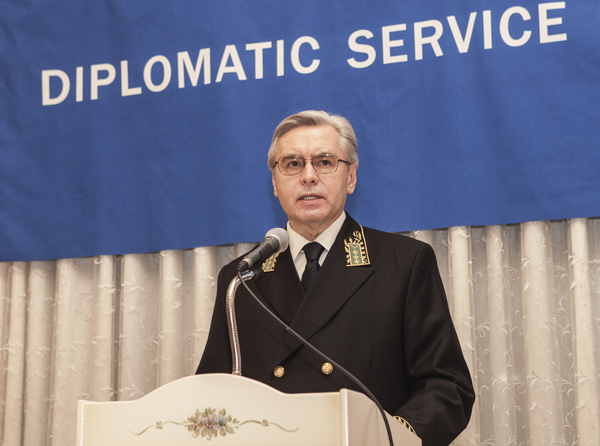 The new Russian ambassador to South Korea, Alexander Timonin, makes a speech to commemorate Diplomatic Service Day at the Russian Embassy in Seoul on Wednesday. By Park Sang-moon

The new Russian ambassador to Seoul, Alexander Timonin, encouraged trilateral economic cooperation between Moscow and the two Koreas, but voiced concerns over South Korea’s possible deployment of a Washington-led antiballistic missile system on the Peninsula.

“We are concerned about the continuing attempts to bring elements of confrontation into the [Asian] region,” said Timonin in his welcome address at a Diplomats’ Day reception hosted by the Russian Embassy in central Seoul on Wednesday. “We regard the United States’ intention to extend its global defense system to the Asia-Pacific region as counterproductive and destabilizing.”

The United States has been pushing to deploy its Terminal High-Altitude Area Defense System (Thaad) battery in South Korea. Washington says there has been no official discussion about the issue with Seoul officials yet and maintains that the deployment of Thaad would be to counter the North Korean ballistic missile threat.

Both China and Russia have expressed opposition to the deployment of Thaad, claiming it is against their security interests and that it could be used as a method of surveillance.

Timonin continued, “We are convinced that what the Asia-Pacific region needs now is not new dividing lines but consolidating initiatives, restraint in the military field... dialogue and peaceful negotiation of disputes” in order to establish long-term peace and security.

Timonin is the first ambassador to be transferred to Seoul from a post as the top envoy in Pyongyang, where he served since May 2012. He arrived in Seoul at the end of last month with his wife, Natalia Timonina, and their dog to replace Konstantin V. Vnukov as the ambassador to South Korea.

He was one of seven ambassadors who presented their credentials to President Park Geun-hye on Thursday.

The reception on Wednesday was attended by more than 100 diplomats, government officials and members of the media to celebrate Russia’s Diplomats’ Day, which commemorates the founding of the nation’s diplomatic service on Feb. 10, 1549.

“We work closely with the Republic of Korea in search of ways to settle the nuclear problem on the Korean Peninsula and resume the six-party talks as soon as possible,” said Timonin.

The six-party talks to denuclearize Pyongyang, held between the two Koreas, China, Japan, Russia and the United States, have been stalled since 2008.

He also said that he is looking forward to more trilateral cooperation between Moscow, Seoul and Pyongyang.

“Russia devotes special attention to the promotion of trilateral economic projects on the Korean Peninsula,” Timonin said. “In our view, enhanced cooperation in this area will create more favorable conditions for the normalization of inter-Korean relations.”

Seoul and Moscow have pushed for a trans-Korean railway that would connect with Russia’s Trans-Siberian Railway, as well as joint development of rail, gas and electric power infrastructure projects.

“For me, as the new Russian Ambassador to the Republic of Korea, the most important task is to promote the further development of Russian-South Korean cooperation in every possible way,” he said.

Kim Han-gill, former co-leader of the New Politics Alliance for Democracy and president of the Korea-Russia Parliamentary Council, said in his congratulatory remarks, “Ambassador Timonin is a person who knows both North and South Korea better than anyone else, so we look forward to him playing an important role in promoting peace and reconciliation on the Korean Peninsula.”

South Korea and Russia will celebrate 25 years of diplomatic relations this year.