Veterans in U.S. moved by ‘Ode to My Father’

Veterans in U.S. moved by ‘Ode to My Father’ 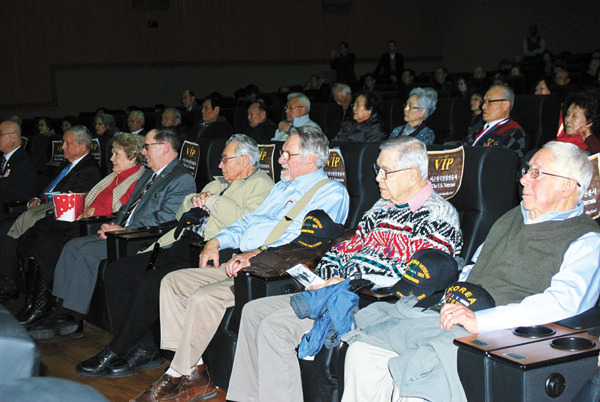 A group of 60 elderly Korean and American war veterans watch the movie “Ode to My Father” on Wednesday at the Regal Fairfax Towne Center in Fairfax, Virginia. [Washington JoongAng Ilbo]

WASHINGTON - The hit Korean film “Ode to My Father,” which touched a generation of movie viewers over the winter here, was screened for a group of 60 elderly Korean and American war veterans at a theater in Virginia on Wednesday.

For these Korean War veterans, watching the box-office hit that has attracted more than 12 million viewers since December was a moment to reflect on the development of the country they had fought in.

Retired Marine Corps Lt. Gen. Stephen G. Olmstead, 85, was one of the veterans who attended the screening at the Regal Fairfax Towne Center in Fairfax. His eyes were moist as he watched the film, which depicts the life of a man born in 1942 who survives the 1950-53 Korean War and works hard to support his family during South Korea’s era of modernization.

Lt. Gen. Olmstead said Americans often say “the Korean War was a forgotten war.” He continued, “That’s not true. The Korean War might be a forgotten victory... It’s a victory and today’s movie reminds us of that.” 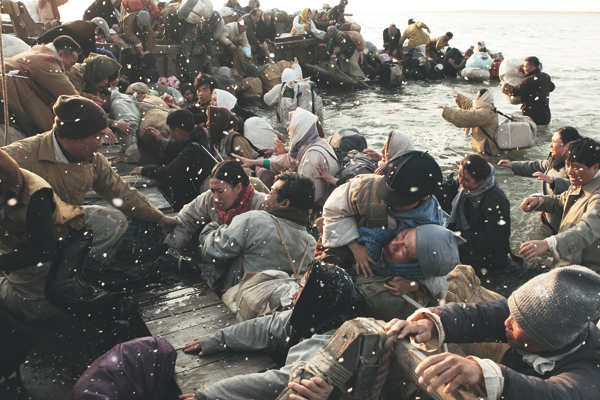 A scene showing the Hungnam evacuation from the film “Ode to My Father.” [CJ E&M]

Olmstead said that modern Korea “is in a great way the result of the sacrifices that the military made in [1950-53]” and also the “suffering that civilians endured at that time.”

About 200 people, including 60 Korean War veterans and the members of the local Korean-American community attended the screening, hosted by JoongAng Ilbo and U.S.-based organizations Korean Churches for North Koreans (KCNK) and the human rights group Liberty in North Korea (LiNK).

The movie, which has been called Korea’s “Forrest Gump,” shows the sacrifices made by Deok-soo, the lead character played by Hwang Jung-min. After becoming the head of his family at a young age, he lives through the Hungnam Evacuation in 1950, heads to Germany as part of the government’s decision to dispatch nurses and miners to the country in the 1960s, and participates in the Vietnam War.

The grandson of American commander the U.S. X Corps, Maj. Gen. Edward Almond (1892-1979), also attended the screening. Edward Almond was recognized for his efforts to help evacuate Koerans on ships out of Hungnam port in North Korea in 1950.

Retired Col. Thomas Fergusson, 72, said his late grandfather, who fought in both World War I and II, said his greatest contribution was in the Korean War.

He said Almond told him that his “proudest accomplishment” was the Hungnam evacuation. The evacuation came after the Chinese military forced the South Korean army to retreat from North Korea during the Battle of Chosin Reservoir in December 1950.

Fergusson added that during the screening, “The person sitting next to me was an American prisoner of war who was captured by the Chinese army for 34 months.”

Another veteran, 84-year-old Kim Yoon-tae, said after the screening, “It’s hard to find words right now. It brought up memories of the past.”

The movie, entitled “Gukje Sijang” (Gukje Market) in Korean, was directed by Yoon Je-gyun and also stars Kim Yoon-jin, famous for the American TV series “Lost” and has become the sixth best-selling movie in Korea.

President Park Geun-hye watched the movie last month and it reportedly moved her to tears.