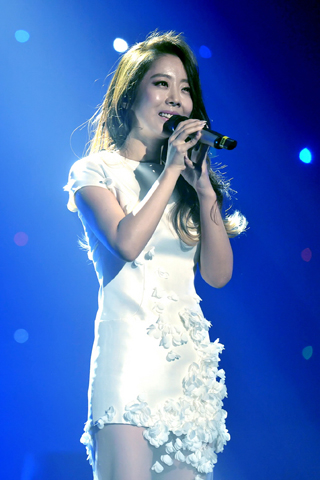 Yangpa, now 36, is back in the spotlight after joining the reality TV show “I’m a Singer.” Provided by MBC

Some people seem born for stardom, and singer Yangpa surely falls into that category.

From her debut performance as a 17-year-old, she was perfect - a teenager with mature and flawless vocals.

Yangpa sang about puppy love in her first single “Aesongyi’s Love,” and her debut album sold more than 820,000 copies.

She was young but also humorous, eloquent and smart. She explained that she chose the stage name yangpa, which means onion in Korean, because she wanted to convey different layers of herself through her music. 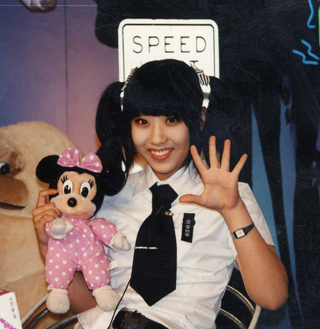 Yangpa broke into the music scene in 1996 at the age of 17 and instantly became a star. She didn’t sing professionally for 16 years because of problems with her former agencies.

Her agency’s decision to promote Yangpa as a model student also helped add to her appeal. She was indeed an excellent student.

Teenage singers are a dime a dozen now, but she was one of the first to break into the scene and won accolades as she topped the charts on major TV music shows in the shortest period of time for someone her age.

But the young singer was under a lot of pressure to live up to her image as a versatile singer who is also good at studying.

A year after her debut, she took the College Scholastic Ability Test but did not manage to complete it because of stomach cramps. Rumors emerged that she purposely did not finish the test because she thought she would get a bad score.

Although she failed to take the college entrance exam, her subsequent albums all became huge hits. She was immune to the sophomore slump.

But in 1999, she abruptly left for the United States to learn more about music. She disappeared from the public eye for eight years until she released “Love… What is It?” in 2007.

Despite her long absence, the song hit the top of many music charts, but she had to put a halt on her singing career again because of trouble with her agency and disappeared from the public eye once more.

But Yangpa is back again after joining the third season of the popular reality TV show “I’m a Singer,” in which professional singers compete with one another to earn votes from audience members.

Although she still doesn’t have an agency, her popularity has surged again, eight years after her last single and 19 years since her debut.

Ilgan Sports, an affiliate of the Korea JoongAng Daily, sat down with the singer and bombarded her with questions about everything from her early years as a singer to her recent experiences on the competitive reality TV show.

Here are the excerpts.
Q. Everyone was surprised by the news that you joined “I’m a Singer.” How did you end up on the show?


A. It’s all thanks to “Aesongyi’s Love.” After the drama series “Reply 1997” aired [in 2012], I could earn quite a lot of performance fees [because the song was included on the drama’s soundtrack]. And the drama series made me want to create a new version of the song. That was when I got an offer from the production team of “I’m a Singer” and they wanted me to choose “Aesongyi’s Love” for my first stage of the competition. I said yes because I could sing a new version of the song as I wished.


The show puts a lot of pressure on professional singers because it is a competition and nobody wants to be eliminated. Have you enjoyed it so far?

Until the second performance, I was feeling all right, but I recently had to go to the doctor. I was in pain after staying up for two nights because I had to choose a song for my next performance. I feel like we are racehorses wearing blinker hoods. We just look ahead.

You’ve been away from the music scene for eight years without an agency. Is there a reason you haven’t settled down with an agency?


I think it’s my problem. I was traumatized by my first agency. I just can’t decide. I find it hard to strike a balance between the music I want to do and the music my agency wants me to do.

It’s been rumored that you are a difficult singer to work with because you have your own preference when it comes to music.

If I were a producer, I wouldn’t like singers who don’t want to compromise over music. But when a singer has his or her own philosophy, I believe they are able to produce a different level of music in the end.

The song “Love… What is It?” was successful, but why did you disappear from the music scene again after releasing it?

Everything seemed so good back then. The head of my agency understood the things that I wanted to achieve in music. I received an award at a year-end music ceremony for the song. After the successful release [of the song], I went on a trip and I found that the head of the agency had been replaced with someone else when I returned home. I had no choice but to take a break.

You were loved by fans when you started singing, but then you suddenly decided to leave for the United States to study. Why did you make such an extreme decision when you were at the height of your career?

People always want to know why I ran away from the things I had because they thought I had everything I needed. But I was having trouble with my agency and I couldn’t keep working under such circumstances. I also had to apply for the College Scholastic Ability Test again, but I wasn’t confident. That was when I found out that I got a scholarship audition from Berklee College of Music [in Boston].

It’s hard not to mention your College Scholastic Ability Test. People wanted to know whether you were an excellent student or not through the results of the test, but you gave up on the test in the second section.

I spelled my name wrong on purpose whenever I took tests back in high school because I didn’t want people to know my grades. I was obsessed with school grades. I was extremely stressed whenever midterms and final exams approached. On the day of the national scholastic test, I was fine for the first round but then I began to shudder with a cold sweat. Students who were taking the test in the same classroom blamed me for interrupting their exams. I eventually fainted and went to the nurse.

You were a talented singer, so why were you so obsessed with your grades?

When I was young, I was a rebel but there were few things I could do [about my frustrations]. I listened to the music of Kim Dong-ryul and just kept studying. That was how I vented my anger [about society and older people]. And then I happened to release an album and found that I had become a successful singer without really knowing what music was.

Do you think you have grown a lot over the years?

I was in search of something other than singing when I was young, but I came to realize while performing on “I’m a Singer” that my life has always been focused on singing because I love to sing.

Any plans to release a new album soon?

I’m always working on music, but I think I have to find an agency first. Hopefully I can release a new album in the first half of this year.