A glimpse into the lives of hanok owners

A glimpse into the lives of hanok owners 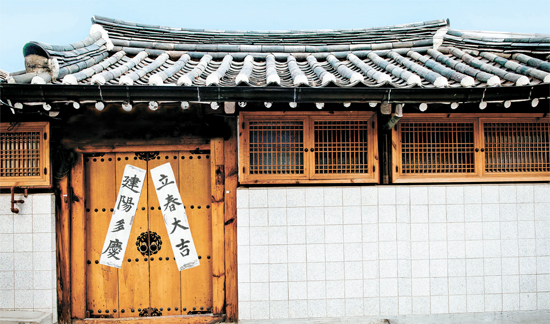 Hand-written calligraphy banners are plastered outside the entrance of a hanok (traditional Korean house) in Bukchon, a neighborhood well known for its cluster of older homes in central Seoul. The banners read ipchundaegil, meaning “to have luck following the onset of spring.” By Kim Kyung-rok

For most people who live in an apartment building or a multi-unit residence, there is no need to make changes when a new season comes - except perhaps to replace the linens or curtains.

But for people living in a hanok, or a traditional Korean house, ipchun, or the onset of spring, means a lot more than changing the fabrics inside their homes.

From simply putting hand-written calligraphy banners outside their doors reading ipchundaegil - meaning “to have luck following the onset of spring” - to polishing the wooden pillars of their houses with vegetable oil, life in a hanok requires stacks of work.

Yet many people living in concrete slabs dream of living in the old yet humble houses.

Marking the arrival of ipchun, which fell on Feb. 4 this year, the JoongAng Ilbo looked into the lives of a handful of people who live in hanok and how they prepare for a new season.

For Peter Bartholomew, an American businessman who’s been living in a small hanok for 41 years, spring always starts with dabbing perilla seed oil onto the pillars of his hanok.

His hanok was built in 1924 and he plans to renovate it for the first time in 35 years this spring.

The giwa, or the roof tiles, will be replaced and some of the wooden pillars will be renovated.

Glass doors that were temporarily installed during winter to prevent cold air entering from the outside will be removed. His daecheongmaru, or wooden floor, will then be ready to be weathered by the sun and wind during the new season. 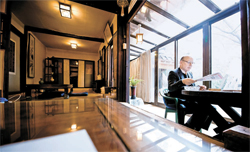 Peter Bartholomew, an American businessman, has lived at a hanok, or traditional Korean home, located in Dongsomun-dong, Seongbuk District, northern Seoul, for 41 years. By Kim Kyung-rok

“One of the oldest spring rituals for people living in hanok is wiping pillars clean and applying perilla seed oil or camellia oil onto the pillars of hanok,” said Bartholomew, who knows more about hanok than many Koreans do.

“Oil prevents the pillars from being exposed to moisture and dust.”

The businessman, who is often dubbed “the blue-eyed guardian of hanok” said, “Many people think hanok are vulnerable to cold and also require a lot of care, but this is not so true.”

When the Seoul Metropolitan Government attempted to demolish about 40 hanok located in his neighborhood in 2007 because of a city redevelopment project planned for the area, Bartholomew staged a campaign to stop the old Korean houses from being destroyed.

His love for hanok dates back to 1968. He lived at Seongyojang for four years, which is a famous hanok in Gangneung, Gangwon.

Cho Yu-gyeom, who’s been living in Seochon, or the region west of Gyeongbok Palace, for about a year, is also busy planning her spring to-do list.

She aims to dry all the blankets, bowls, plates and even spoons and chopsticks from her hanok under the spring sun when the temperature goes up.

She also wants to plant some flowers in front of her garden and outside her house.

“I heard this area used to have a lot of four o’clock flowers in the past. I will plant the flowers with my neighbors this spring,” she said.

The 48-year-old Seochon resident used to live in a multi-unit residential building in Buam-dong, Jongno District, central Seoul, but she decided to move to Seochon for her six-year-old son.

When she discovered this hanok with a small front yard, she signed the contract without hesitation.

Cho and her family have become somewhat different since they moved to Seochon. After work, her husband takes a shower and sits on the daechungmaru with a cold beer while Cho sips a cup of tea in the living room, watching her husband enjoy the night. 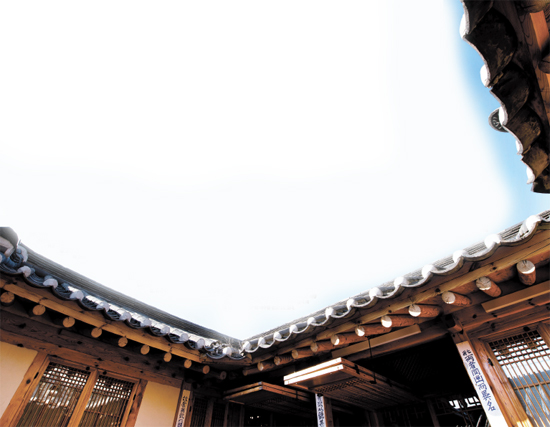 She said the scent of the wood in the old wooden house and the view of the sky from her small garden are small luxuries that are only given to people who live in hanok.

Ku Jeong-yeon, who was born and raised in Gangnam, a southern part of Seoul that is dotted with skyscrapers, is waiting for her second spring living in Seochon.

“I never knew how bright the moon was when I was living in an apartment,” said Ku.

Ku, a native of Gangnam, discovered the beauty of hanok while she was commuting to Bukchon, a neighborhood with a cluster of traditional Korean homes in central Seoul, near Seochon.

In order to find her dream hanok, Ku lived in a multi-unit residential building in Seochon for four years until she finally came across her ideal home.

But the first winter in hanok was harsh for Ku.

But after surviving Korea’s coldest months, Ku said she created a routine to cope with the winter chill.

“I covered all the windows with bubble wrap and bought electric heated mats and an electric stove. With these, this winter was much better than the first,” she said.

Bubble wrap, usually used to wrap fragile objects, is known to be effective in preventing the cold wind from penetrating indoors.

She also signed a contract with a private security company to ensure her safety because hanok are less secure than apartment buildings.

Not always the best match

Although many people, especially those who live in apartment buildings, have fantasies about hanok, not everyone who makes the move into one of these traditional houses live happily ever after.

According to hanok residents, there are some things people have to give up on if they decide to move to this type of dwelling.

“I couldn’t drive my car down this small and beautiful alley,” said Cho, who settled down in Seochon about a year ago.

She sold her car as soon as she moved into her hanok.

Some people who bring all their furniture and electronic goods to their hanok have a hard time adapting to their new life because most of these older homes are less spacious than apartments.

Kim Sung-jun, who’s been living in Seochon for a long period of time, defines life in a hanok as “emptying yourself.”

“Just possess the minimum number of household goods and establishments and enjoy the things your house offers you. That is one way to enjoy life at a hanok,” Kim said.

People who don’t like to mingle with neighbors also find it hard to live in a hanok.

“You are bound to share food with your neighbors and have a little chat with them on your way out. Sometimes you have to remove snow for a grandma living next to you,” Kim added.

“But people who are not ready for this eventually leave hanok.”

A hanok has its own beauty.

But the thing is that the old, wooden structures are increasingly expensive to buy these days because more people are interested in living in them than before.

Prices vary depending on size and location, but realtors who cover Seochon and Bukchon, two of the most well-known hanok neighborhoods in central Seoul, say the sale price of a decent hanok tends to be higher than the cost of a spacious apartment located in Gangnam, an affluent part of Seoul.

If you want to rent a small hanok, which is about 46 square meters with two rooms and a small front yard, the jeonse (a lump sum two-year housing lease) price is about 120 million won, and a larger hanok of about 198 square meters costs about 750 million won. But jeonse is hard to find and most hanok owners put their housing up for monthly rent only.

In Bukchon, where the hanok are a lot larger than in Seochon, a 56.2 square meter construction can be rented with a 100 million won deposit and a rental fee of 1 million won a month.

A hanok with a good view and a parking space is priced at 50 million and 60 million won per square meter.

Since most hanok are old, many of them are in need of renovation.

Per single square meter, a simple renovation is priced at about 5 million won.

But when a whole house needs to be reconstructed, except for the main framework, it costs about 10 million won per single square meter.

“Even if there are two hanok of the same size, the renovation fees are different depending on the type of hanok because all hanok are different.”

Kim added, “There are traditional hanok, but some are modernized. Depending on the type, a wooden door or a knob has different price tags.”

Instead of purchasing an old home, some wish to build their own.

All the 155 pieces of land sold out within five months.

During a recent visit to the construction site of the village in the new town in Eunpyeong, hanok of all imaginable shapes - from two-story constructions to those built with black bricks - were under construction.

But Bartholomew maintains that the best way to enjoy hanok is to purchase an old one and renovate it in your own way.

“There are about 750 hanok in Bukchon, and other parts of Seoul such as Seongbuk-dong, Jegi-dong and Anam-dong also have more than 3,000 hanok.”

For example, an owner of a 49.6 square meter hanok is able to receive up to 60 million won when the hanok is in need of makeover, but the renovation should qualify for the standard set by the city government.