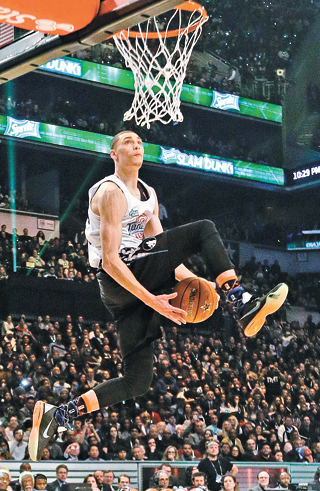 Rookie Zach LaVine of the Minnesota Timberwolves wows the crowd at Barclay’s Center in Brooklyn, N.Y., on NBA All-Star Saturday.[AP/NEWSIS]

Stephen Curry honored a fallen fan the best way he knew how, and Zach LaVine made a name for himself in a dunk contest that lacked star power.

Curry paid homage to one of the three victims of the shooting in North Carolina last week by writing Deah Shaddy Barakat’s name on his sneakers, and he wore the shoes again during the shooting stars competition earlier Saturday night, local time. Barakat was one of three Muslim college students killed Tuesday in Curry’s home state.

“It only seemed right to honor him and his family, and hopefully they know that people are thinking about them,” Curry said. “They’re not alone, and hopefully it can give them some kind of peace and comfort knowing that he was a special guy.”

The All-Star point guard scored 27 points in the final round. Curry connected on 13 consecutive shots until missing his final attempt, bringing roaring fans and celebrities to their feet after every swish at Brookyln’s Barclays Center.

Thompson, who had an opening-round best of 24, scored only 14 points in the final round. Cleveland’s Kyrie Irving finished second with 17 points in the three-man final.

It was a rare year when the 3-point competition had as much - if not more - intrigue heading into it than the dunk contest because of the notable names who were - and weren’t - participating.

Yet LaVine left a lasting impression few will forget.

The 19-year-old Timberwolves rookie scored a perfect 100 in the opening round. He highlighted his scintillating start with a through-the-legs, one-handed reverse slam. He wore a white No. 23 Jordan jersey for what he dubbed the “Spash Jam” dunk.

LaVine had a final round of 94 to overtake Orlando’s Victor Oladipo, who struggled to convert his first attempt in the final and finished with a 72 in the championship round. He became the first Timberwolves player to win the dunk contest since Isaiah Rider in 1994.

Oladipo, the shortest in the competition at 6-foot-4, still delivered a crowd-pleasing moment.

He missed his first two attempts in the first round before completing a 360-degree reverse dunk. He received a 50 from the Hall of Fame judges - Julius Erving, Walt Frazier, Nate Archibald, Bernard King and Chris Mullin.

Even with all the above-the-rim athleticism, the MVP frontrunner put on quite a show from long distance.

Curry, who set the NBA record with 272 3-pointers in a season two years ago, took home the 3-point crown on his fourth try. He earned bragging rights over his fellow “Splash Brothers” star in the process, putting pressure on Thompson to follow his spotlight-stealing final round.

He couldn’t. Nobody could.

Atlanta’s Kyle Korver, who is shooting a league-high 52.3 percent from beyond the arc, and defending champion Marco Belinelli of San Antonio never made it past the first round with scores of 18. Portland’s Wesley Matthews finished with 22, Los Angeles Clippers guard J.J. Redick scored 17 and Houston’s James Harden had 15.

Wilkins, the 55-year-old former Atlanta Hawks star, hit a half-court shot after 57.6 seconds in the final round to seal Team Bosh’s three-peat. AP