Ever been in a situation where you have to go to an important business meeting but all of your suits are crinkled up because you didn’t have time to dry clean them? Or you’re single and stuck with a washing machine that takes up too much space in your small apartment?

Electronics consumer goods tackling problems like these are grabbing attention and creating new markets for themselves with functions that have never existed before.

An example of such a product is LG Electronics’ Tromm Styler, which is also referred to by Korean consumers as a “cloth refrigerator.”

This contraption looks like a fridge on the outside but is actually for clothes that are usually sent to the dry cleaners. It sterilizes the article of clothing, getting rid of any smells or stains and removing creases. 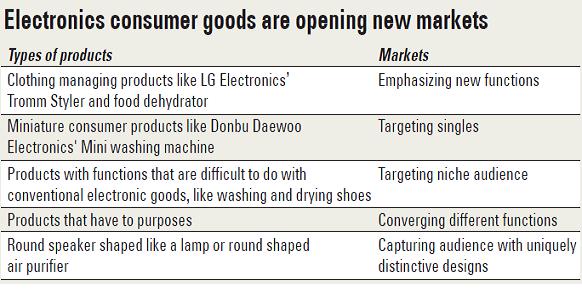 It became a sensation, especially among stylish consumers, when it first hit the market in 2011. Three years later, in December 2014, the Korean electronic goods manufacturer has released an updated model that is much slimmer than the earlier version and has also upgraded its smartphone connectivity function.

According to the company, the new Tromm Styler is 1.8 meters (5.9 feet) tall, 44.5 centimeters (17.5 inches) wide and 58.5 centimeters deep. It is 30 percent smaller than the previous model, allowing for a better use of space.

Furthermore, the upgraded version has a near field communication tag, which allows the user to identify if the machine has a malfunction by using their smartphone. It can also be operated with the use of a mobile phone app.

LG Electronics has opened up a new market for itself with this product, which differs from a conventional washing machine as it does not use water or detergent.

“We are seeing growing demand from newlyweds and by restaurants who uses it for customer service,” said Kim Kyung-hwan from LG Electronics’ PR office.

A relatively new electronic item for the kitchen that is also gaining widespread popularity is the food dehydrator. This product has become a must-have among housewives, whose interest in healthy food has grown in recent years. The product dries out fresh food, especially fruit, creating crunchy treats that are especially popular among children.

It also increases the period of time these foods can be preserved for without affecting their nutritional quality.

Korean housewives even use the product to make their own chili powder, which is used in a lot of traditional Korean cuisine, including the nation’s biggest staple, kimchi.

Another product that has become a must-have in the kitchen is Phillips’ Air Fryer, which fries food without using oil.

Some electronic consumer goods manufacturers are targeting singles that live alone. Products for single-person households have been growing in number, and the variety has become more diverse as these homes have rapidly increased in recent years.

According to Statistics Korea, there were roughly 5 million single-person households last year, which account for 26 percent of all households in the country. This figure is expected to increase to 29.6 percent in 2020.

One of the products that has already attracted people who live alone is Dongbu Daewoo Electronics’ Mini drum washing machine. This product is exceptionally small compared to the average drum washing machine at just one sixth of the usual size. It is only 29.2 centimeters thick and has a load capacity of 3 kilograms (6.6 pounds), which is far smaller than the average 15 kilograms.

But the most unique feature of the washing machine is that it can be hung on walls like a clock or picture frame, taking up less space as a result. When it was created it was the world’s first washing machine that could be attached on the wall.

The product is even enjoying widespread popularity in China. According to the company, the Mini took up 64.6 percent of the small washing machine market with a load capacity of 3 kilogram or smaller in China last year.

LG Electronics’ Comangs is another washing machine that is attracting single people because it gets the job done in a shorter time.

According to the company, the washing machine with a load capacity of 3.5 kilograms can clean and spin-dry clothes in just 17 minutes. A full-size drum washing machine takes roughly an hour and a half to wash clothing.

Coway’s water purifier, which is the size of an outstretched hand and only 18 centimeters thick, is 50 percent smaller than a conventional water purifier. It is another product that is targeted at people who live alone.

Although it is smaller in size, it has all the functions that are available on the larger models, including providing hot and cold water.

Such products include a vacuum cleaner that is exclusively used to clean beds as well as a sterilizer and dryer for shoes.

There are also changes taking place in dehumidifiers, which have become a necessity for many Korean households in the summer as the country’s atmosphere is becoming more humid.

But unlike in the past, the latest dehumidifiers and humidifiers come with additional functions, including air purifying. Two examples are Winia Mando’s Air Washer and Samsung Electronics’ Natural Air Humidifier.

Such extra functions were largely added because of growing concerns over the yellow dust that blows in from China every spring. Additionally, as more consumers are finding that they need to buy two different consumer goods for their growing needs, the manufacturers have introduced products that have several functions.

The same thing is happening in other areas. Companies are releasing products that work as air coolers in the summer and heaters during winter.

Samsung Electronics has introduced a refrigerator that comes with a carbon water producer as well as a product that combines the functions of both an oven and microwave, and a cold water purifier with a coffee machine.

Some of these products are creating a new following with their uniquely distinctive designs.

At first glance, some consumers find it difficult to understand the sole purpose of certain goods. Samsung Electronics’ WAM7500-6500 speaker is one of these indistinguishable objects. The product’s exterior looks like a lamp with its oval shape, but it is actually a speaker that delivers surround sound.

LG Electronics’ Montblanc has subverted the idea that air purifiers have to be designed in the shape of a square or a rectangle. Instead, this air purifier has a circular shape.

The growing interest in unique styles and interiors has resulted in demands for products that stand out, particularly among younger consumers.

Experts say the consumer electronics market is already highly competitive, and without ideas and designs that make products stand out against existing and dominant goods, it is difficult to be successful.

“The entry of the smartphone into our lives has revolutionized and changed everything we knew,” said Junn Haan-suk of the Institute of Global Management.

“Consumers’ desires for products in a new category that distinguishes them from conventional products has grown significantly.”

Juun said that to meet such a growing demand it is important to create an innovative corporate culture while securing core technologies through consistent investment in research and development.

While there are growing demands for new products and new designs, there is also a proliferating number of consumers who are seeking retro-style goods.

The camera market has long been dominated by digital products, including those embedded in smartphones. But at the same time, a craving for instant cameras such as the Polaroid remains strong in the market, even here in Korea. Polaroid no longer manufactures cameras since it pulled the plug in 2008, and now the only company that manufactures instant cameras is Fuji Films. The Instax sold two million units alone in Korea last year. This is one of the few analog products that still prints out pictures.

As Instax continues to attract consumers, many companies, ranging from major electronic goods manufacturers like LG, as well as telecommunication companies and even printer companies, are introducing instant photo printers.

The interest in old-school products is also affecting the digital TV market. LG’s digital television comes with knobs to turn the channel and an exterior that resembles old tube TVs. Although it is not a best-seller, the company says its sales are steady, adding that one out of every five 32-inch LED TV that it sells is the one with the classic design.

Similarly, Samsung Electronics has introduced a speaker whose parts include a vacuum tube amplifier that provides sounds much like the old audio system instead of the digitalized sounds

“There is no other key word like ‘old fashioned’ in targeting older generation,” said a Samsung Electronics official. “Also there are growing numbers of young people in their 20s and 30s who are taking interest in analog design compared to the more sleek designs of today.”