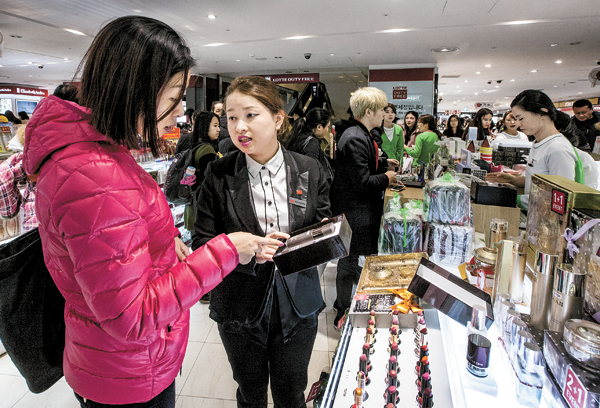 Kim Hae-hwa, a Korean-Chinese employee at Lotte Duty Free who came to Korea in November, explains skin products to a Chinese customer last week. The flag badge on her lapel indicates she is capable of speaking Chinese. By Park Sang-moon

After graduating from college five years ago, Lee Ju-yeon came to Korea from China to live with her mother, a waitress, and father, a manual laborer.

They are Chinese citizens, but ethnically Korean, part of what is known in China as the Chaoxian ethnic minority.

They struggled here as minorities, and Lee’s parents never had the chance to earn college diplomas. She knew she wanted to do better, and capitalized on her higher education and bilingual ability.

“One day, my friend working at a duty-free shop sent me a job notice over the phone and suggested I apply to work as a salesperson,” said Lee, who requested that her real name not be used. “I applied for five positions at duty-free stores, and all of them asked for interviews.”

Her job put Lee among countless Korean-Chinese workers who, once concentrated in the labor and food service sectors, have emerged in multitudes in the retail sector.

Many work in small stores - most commonly duty-free shops - where Chinese-speaking employees are in high demand due to their ability to cater to the needs of the throngs of Chinese tourists, known as Youke in Korea which means a “tourist” in Chinese.

“In our duty free stores in downtown Seoul, 70 percent of the customers are Chinese,” said a representative for Lotte Duty Free.

Lotte Duty Free said it has 1,800 employees at its two branches in the capital city. The manager of a brand-name product company in duty free stores nationwide, said it was about three years ago that the business started to consistently hire Korean-Chinese employees.

But besides language, there’s another reason why such companies prefer Korean-Chinese workers.

“Think about when you go abroad as a Korean and enter a store. You will feel more welcome if a person from your own country greets you and explains the products,” the manager said. “In that context, we believe Chinese customers will feel more familiar with the brand and our products through interacting with Chinese salespeople.”

Yuehong Shi agreed with that assessment during a recent visit to a Lotte Duty Free store in Jung District, central Seoul. The Chinese national was in Korea on a lavish shopping spree.

“If the salesperson can speak Chinese, I feel more comfortable hearing about the products that person is promoting, which often leads me to buy more than I plan to,” Shi said. “After Lotte, my next destinations are the Shilla Duty Free store, the Myeongdong shopping district [in central Seoul] and Incheon airport’s duty free store on my way back to China.”

Still, it’s not always easy to find such coveted positions, and most employees acknowledged that relying on friends who already work in duty free shops is the best way to hear about job openings.

One Korean employee of a duty free shop in Seoul, who declined to be named, recalled once walking through the shop’s back hallway only to spot several of his fellow Korean-Chinese co-workers photographing a help-wanted notice on the wall to send to friends.

“Advertisements for jobs at duty free shops aren’t posted actively on job sites like other positions. So in many cases, Korean-Chinese coworkers learn about recruitment from their friends. Sometimes they refer those resumes to their bosses,” he added.

A Korean-Chinese worker who sells skin care products at a duty free store in Seoul found her current job that way. “I was told by my friend who sells sunglasses upstairs that the duty free store was recruiting. She said she saw the notice in the employee lounge,” she said.

The employee added that she came to Korea six months ago, leaving Guangzhou, China, where she worked as an office clerk. Living expenses were so high that she had “almost nothing left over,” which prompted her to come to Korea, she said, like so many others from that region.

“It’s hard to work at a duty free store unless you have a friend employed at a duty free shop,” said another Chinese-Korean worker who works at Holika Holika, a street store that sells facial masks in Myeongdong.

She requested her name not be used due to the sensitivity of her status.

Before working at Holika Holika, she hoped she could get a job at a duty free shop, though she learned through her friend there were no vacancies.

And despite being bilingual, many Korean-Chinese employees say they still find Korean to be a difficult language.

“I receive training three to four times a year to learn how to explain products in Korean,” said Lee Ju-yeon, who came to Korea to live with her parents five years ago. “The most difficult part is memorizing products’ specifications in Korean.”

Choe Jin-young, who heads China CS (Customer Satisfaction) Academy, a consulting and training company that helps Chinese employees adjust to Korean culture, said that despite being great assets due to their bilingual ability, complaints about Korean-Chinese employees mostly come from Korean customers. That’s due, in large part, she said, to their sometimes heavy accents and generally different attitude toward customer service.