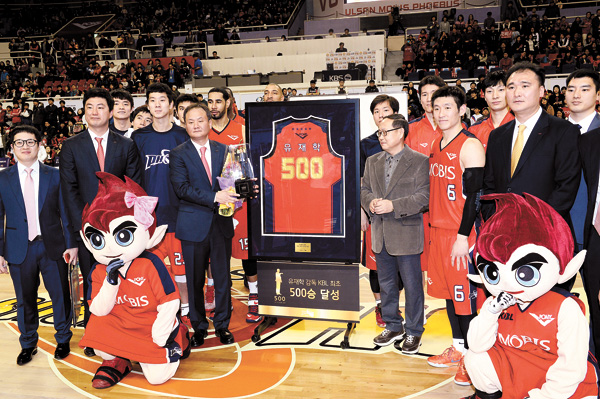 Coach Yoo Jae-hak of Ulsan Mobis Phoebus is honored after his 500th win on Sunday at home against the Seoul SK Knights. [NEWSIS]

Popovich has led the Spurs to five NBA champions since he took over in 1996, and Phoebus has won four KBL titles under Yoo came since 2004.

A. I still remember when we won the league championship for the first time in 2006-7 season in seven games against KTF. Cho Dong-hyun, now an assistant coach of Phoebus, came for nighttime training sessions even after being hospitalized for a long time because of a knee injury. I give more credit to those who work hard than to talented ones. I tried really hard, too, because I was only 180 centimeters (5-foot-10).

The relationship between you and Yang Dong-geun seems to be similar to that between Popovich and Tim Duncan.

A strength of the San Antonio Spurs is that they don’t depend too heavily on specific players and try as a team. Yang has become the country’s top guard, but he never grows idle, and he also has huge influence on the team just like Duncan.

You expelled Rodrique Benson from the team in September. It is said that he asked for bribes and didn’t behave well.

When I was an assistant coach, I learned from Coach Choi Hee-am how important it is to stick to principles. Managers should know how to scout selfless foreign players. Ricardo Ratliffe, for example, has great personality and is spending his third season with us.

Busan KT Sonic Boom is considering replacing Coach Jeon Chang-jin, who’s posted 423 wins so far, the second highest, and Hur Jae stepped down from Jeonju KCC Egis. Now there are only nine former and incumbent coaches with more than 200 wins.

Teams that often change managers because of performance cannot prevail. Phoebus sometimes finished the season in eighth or ninth place, but the club signed me for five more years in 2010.

It is true that players did better in the past, but the defense of the time wasn’t that good. We’ve seen much improvement in defense recently and the Korean offense isn’t catching up with it.

That also is the reason why we lost all five games at the Basketball World Cup last year. We need to play team-oriented basketball just like Spain or France, and it means we need to have better basic skills.

I emphasized after winning the gold medal at the 2014 Asian Games in Incheon that there weren’t any players who can break through one-on-one defense and universities should teach them basics with long-term plans.

As a coach with 500 wins, what do you think of Korean basketball?

How do you want to be remembered as a coach?

I won’t expect them to remember me as a good man because I keep nagging. But I do want to be remembered as a coach who taught real basketball to them.