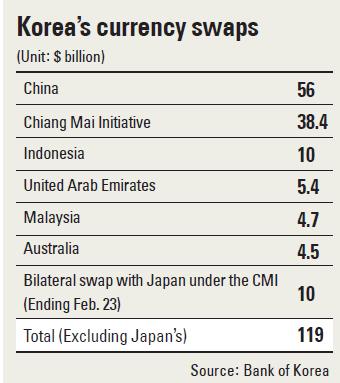 Korea and Japan pulled the plug on their currency swap arrangements after 14 years as geopolitical tensions sparked by President Lee Myung-bak’s surprise visit to Dokdo in 2012 continue to reverberate.

The market has expected the central bank currency swap agreement to end. The amount involved has been shrinking since 2012.

The currency swap arrangement, designed to help either country in case of a financial or liquidity crisis, was first made in July 2001. The starting amount was $2 billion. Over the years, the size continued to expand and reached $70 billion in 2011.

However, relations between the two neighbors started to sour after Lee visited Dokdo in August 2012. His comment that the Japanese emperor should wholeheartedly apologize to Koreans who lost their lives fighting for Korea’s independence from Japanese colonial rule only deepened the rift.

Since then the Japanese Finance Ministry, including Taro Aso, the finance minister and former prime minister, has maintained that Japan has no interest in extending the agreement unless the Korean government made a request, which it didn’t.

The first downsizing of the agreement came in October 2012 when a $57 billion contingency was reduced to $3 billion. The $3 billion swap was allowed to expire in July 2013.

As a result, the only currency swap line left between the two countries is a $10 billion bilateral pact that is part of the Chiang Mai Initiative, which expires next week.

Currency swaps are safety nets for times of economic crisis particularly involving a shortage of dollars, which Korea faced during the late 1990s financial crisis as well as the most recent global crisis in late 2008.

Analysts say the Korean authorities didn’t need to extend the agreement with Japan because of the country’s solid fundamental safety net, including abundant foreign exchange reserves and a record current account surplus.

As of January, Korea had $362.2 billion in foreign reserves while the current account surplus last year broke a new record to reach $89.4 billion.

As of December 2014, Korea ranked seventh in the world for foreign reserves while Japan ranked second with $1,260.5 billion. After the global crisis in 2008, the Korean government has been stacking up its foreign reserves as a contingency against an exodus of foreign investment that could bring volatility to the financial market.

The end of swaps with Japan is expected to have scant impact on the economy.