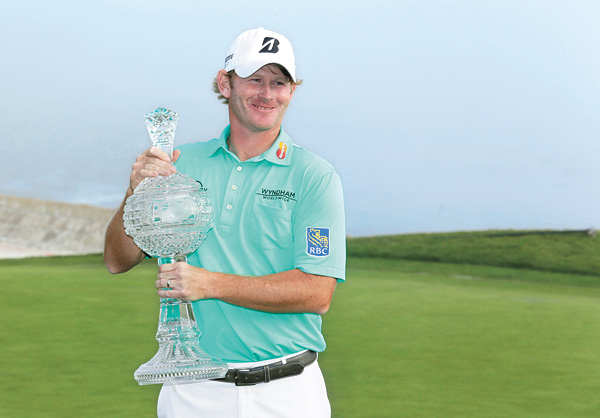 Brandt Snedeker broke his own scoring record to win the AT&T Pebble Beach National Pro-Am for the second time in three years.

Snedeker played bogey-free in the final round Sunday and left the mistakes to everyone else. He closed with a 5-under 67 and a three-shot victory over Nick Watney, and the timing could not have been better.

Snedeker fell out of the top 50 at the end of last year for the first time since 2011 and was guaranteed of playing only one major and no World Golf Championships unless he turned his game around.

One great week at one of his favorite gold locations has changed everything.

The victory assures him a spot in the Masters and PGA Championship. And he moves to No. 31 in the world rankings, which most likely gets him into all the WGCs, starting with Doral in three weeks.

“I’m just so excited about what’s next,’’ Snedeker said.

He made only one bogey in 72 holes of glorious weather, as good as it gets at Pebble Beach. And when he finally took the lead after Watney made his worst swing of the week - a 4-iron right of the sixth fairway and into Stillwater Cove - Snedeker pulled away, taking all the drama out of the final hour.

A conservative par on the final hole gave him a 22-under 265, breaking the scoring record by two shots that he set in 2013. He also broke by two shots the score to par previously held by Phil Mickelson (2007) and Mark O’Meara (1997) when the par-72 Poppy Hills was still in the rotation.

Watney opened with four straight birdies, but it was three bogeys in a five-hole stretch at the turn that cost him. He rallied with a pair of birdies for a 69 to secure second place alone, a good step for him getting his game back in order.

Charlie Beljan closed with a 66 and finished third.