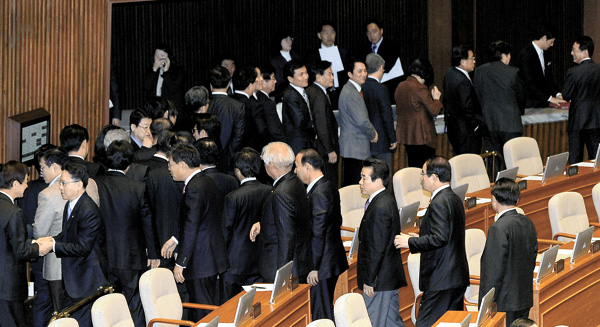 Lawmakers on Monday stand in line to cast their ballots on a bill to endorse the nomination of Lee Wan-koo as prime minister in the main conference hall of the National Assembly. [NEWSIS]

The National Assembly confirmed Lee Wan-koo as prime minister Monday by a vote of 148 to 128. Five votes were counted as invalid.

The close outcome illustrates the partisan split over the past three weeks as to whether Lee was qualified to serve as prime minister. Since 281 lawmakers attended the parliamentary session, Lee needed half on his side, about 141 votes.

It was a white-knuckle vote for the ruling Saenuri Party and the Blue House, which failed last year to confirm two nominees for prime minister.

It is assumed that all NPAD lawmakers cast “no” votes for the former South Chungcheong governor amid a raft of allegations raised over the past few weeks against Lee that called into question his qualifications.

Over the last weekend, the NPAD leadership continued to demand that Lee walk away from the nomination, citing allegations about real estate speculation, dodging of military service and his alleged willingness to interfere in freedom of the press.

The Saenuri Party said in a somewhat defensive statement following the vote that it hopes Lee will become a “prime minister who understands the agony of the people, not a prime minster whom the public is worried about.”

The ratification of Lee as the Park Geun-hye government’s second prime minister comes 24 days after the president tapped him to replace Chung Hong-won, who kept his position after Park’s two choices to replace him both bowed out due to controversies over their ethical standards.

While 124 opposition lawmakers entered the session to vote, it was not clear until the opening of the session whether the NPAD lawmakers would show up to vote or carry out an all-out boycott in protest of Lee’s nomination.

Political analysts said the opposition could gain public approval for its participation in the vote Monday because it showed respect for the fundamentals of parliamentary democracy, which a boycott would not.

“It can be seen as a win-win outcome for both the Saenuri and NPAD,” said Yoon Hee-woong, a political analyst at the political consulting firm Min. “For the opposition, it left a positive impression with the public because it displayed its commitment to following the principles of parliamentary democracy. For the ruling party, it did its job by passing a high-stakes nomination.”

Yoon added that breakaway votes from the ruling party lawmakers should be seen as a sign of disgruntlement with the Park government rather than a challenge to the current Saenuri leadership.

The tug of war over the nomination was a departure from the initial expectation that Lee, a seasoned politician, would easily pass the nomination process. Trouble for Lee began when one allegation after another began to emerge over how he accumulated wealth from a series of buying and selling of property in an affluent Seoul area.

The most damaging revelation came from a recorded conversation with reporters during an informal luncheon in which Lee bragged about his ability to kill a story not flattering to him based on his close relationship with senior journalists.

When he was first tapped for the job, Lee pledged to become a prime minister who could give frank advice to the president. But with his image damaged by the confirmation hearings, it remains to be seen how effective or influential he could become as prime minister.

Following the vote, outgoing Prime Minister Chung had a retirement ceremony at the government complex Monday. President Park will formally appoint Lee as her government’s second prime minister at 10 a.m. Tuesday at the Blue House. With Lee serving as second-in-command, the Blue House is expected to carry out a cabinet reshuffle Tuesday at the earliest.