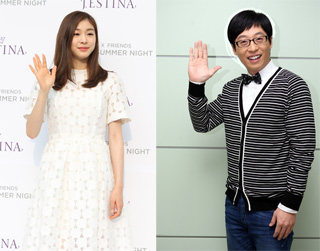 A majority of participants in a recent survey chose comedian and TV host Yoo Jae-suk, right, as the person they’d most want to bring on their trip home during the Lunar New Year holidays, when hundreds of thousands of Koreans hit the road to visit their families and relatives.

According to about 2,000 listeners of KBS Cool FM, a radio station operated by the state-run broadcaster, about 8 percent of survey participants chose Yoo, who is often dubbed the “nation’s emcee.”

He is currently hosting a number of popular reality TV shows, including “Infinite Challenge,” “Running Man” and “Happy Together.”

By gender, however, people who participated in the survey chose different celebrities for their dream travel companion.

Both men and women picked Yoo as their first choice but men chose soloist IU and Suzy, a member of K-pop girl group Miss A, as their second and third picks.

The survey was conducted among 2,102 people via an online poll.