Mom-and-pops and supermarkets can be friends

Mom-and-pops and supermarkets can be friends 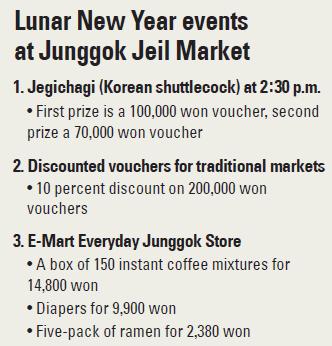 In Korea’s retail industry, small merchants at traditional markets have long been at odds with big supermarkets that have decanted away their customers. They are sworn nemesis like the fox and the hound or Superman and Lex Luthor.

But this week, Junggok Jeil Market in Junggok-dong, northeastern Seoul, has actually gone into partnership with a nearby E-Mart Everyday store to usher in the Lunar New Year.

E-Mart Everyday attracted a lot of attention when it announced its shared-growth initiative last September. As part of the initiative, it stopped sales of fresh food such as vegetables, fruits and fish at its Junggok store in deference to the nearby traditional market.

In return, mom-and-pop merchants at the traditional market are helping promote sales at the E-Mart Everyday store. 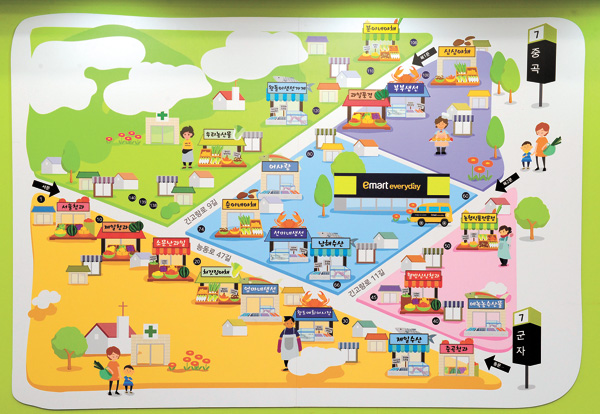 Park Tae-shin, head of the Junggok Jeil Market cooperative, which is located across the E-Mart Everyday, showed an E-Mart employee a text message he sent to 7,000 market customers.

The text informed customers of upcoming supermarket sales, including the sale on Maxim Mocha Mix for 14,800 won ($13) and Huggis Diapers for 9,000 won. The E-Mart employee thanked Park over and over.

In return, the E-Mart Everyday Junggok store filled its Lunar New Year flyers, piled up at the entrance of the store, with Junggok Jeil Market events.

E-Mart customers can now use the parking lot for the traditional market.

However, the traditional market cooperative discounted the parking fee to 300 won per 30 minutes. And if the customers made purchases worth 30,000 won or more at the supermarket, then parking is free.

The turning point was when E-Mart Everyday voluntarily ended the sales of its vegetables and fruits.

However, Park pointed out that fresh food stores only account for 10 percent of the traditional market.

E-Mart Everyday also opened a passage between its store and the traditional market, which won over the loyalty of traditional shopkeepers.

E-Mart Everyday has now become a part of the traditional market and started paying operational fees to the market cooperative.

“If the E-Mart store was separately located next to the market, it would have stolen our customers, but it is now one of our stores,” said Park.

“Young customers come to the supermarket and become our customers,” said Kim Kyoung-il, 45, who runs a fish store.

“I also purchase my daily necessities at the supermarket.”

Fresh food used to account for one-third of the supermarket’s products. It was replaced by 1,000 more types of manufactured foods, pet supplies, stationery and cosmetics.

“We were worried that sales would decline 30 percent when there was no fresh food, but we only saw a 10 percent fall,” said Kim Joo-tae, a manager at the E-Mart Everyday store.

Only a few steps away from the supermarket are traditional fresh food stores that have operated for 20 to 40 years.

The supermarket even posted a map of stores selling vegetables, fruit and fish at its entrance.

“We are planning to establish a play center for housewives with children and a place like a cafeteria, where customers can eat food sold at the market.”