Sneak peek of Tucson for Europe

Sneak peek of Tucson for Europe 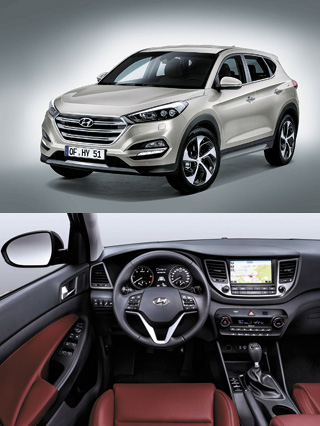 Hyundai Motor released interior and exterior images of the European version of its third-generation Tucson SUV in advance of the Geneva International Motor Show on March 3. Provided by the company

Hyundai Motor on Tuesday unveiled the interior and exterior designs of its midsize Tucson SUV that will be sold in Europe.

The company said the third-generation Tucson, the first makeover of the model since 2009, will be exhibited for the first time at the Geneva International Motor Show starting March 3.

The company said the designs for the Korean market will be unveiled after the motor show.

Hyundai’s basic design concept of Fluidic Sculpture 2.0 is applied to develop a strong and stylish compact urban utility vehicle, and the automaker’s signature hexagonal grille has been added along with LED daytime running lights.

The Tucson debuted in 2004 and has become Hyundai’s best-selling SUV globally. The car will be available with a 1.7-liter or 2.0-liter engine. The lighter model is expected to start at about 20 million won ($18,500) and get about 15 kilometers per liter (35 miles per gallon).