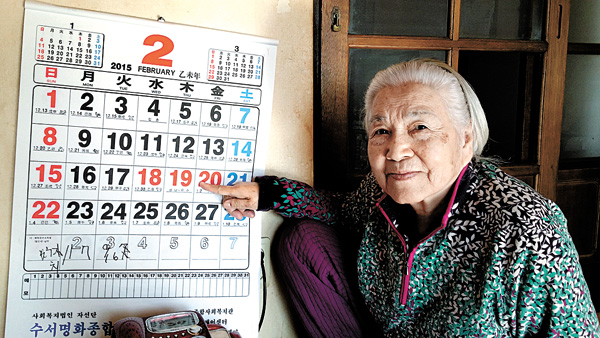 Lunar New Year is usually a happy time for families to come together and celebrate - a joy denied to families who have been split between South and North Korea for seven decades.

“Because Lunar New Year is approaching, my heart is heavy,” said Cho Jang-geum, an 82-year-old woman who was separated from her sisters during the 1950-53 Korean War.

“I lie in bed, singing to myself ‘Living Away From Home,’ and think of my hometown and my older sisters,” Cho says. “Tears fall despite myself and I drift off to sleep.”

This year marks the 70th anniversary of the separation of North and South Korea following liberation from Japanese colonial rule in 1945.

The JoongAng Ilbo conducted interviews with eight elderly men and women who were separated from their families in the North since the division of the Korean Peninsula.

The interviewees had high hopes for another round of family reunions, especially after proposals for an inter-Korean summit were made at the beginning of the year.

But as governments in Seoul and Pyongyang remained far apart on a range of issues, they realized that the chance of family reunions coinciding with the Lunar New Year holiday this week had been lost.

Cho, a native of Pukchong County in the eastern province of South Hamgyong in North Korea, lives alone in a rented house in Suseo-dong, Gangnam District, southern Seoul. The local community center brings her some food twice a week, but otherwise she prepares meals for herself.

In 1945, Cho’s family moved to South Korea, leaving behind Cho’s oldest sister. During the Korean War, Cho’s other sister was captured by the North Korean army in the South. Cho was able to confirm that her second sister was alive through U.S. officials in 1992, but hasn’t heard from her.

She applied for the inter-Korean family reunions in 2000, but she has been on the standby list for the past 15 years.

Cho failed to be selected in the reunion lottery process in October 2013.

“At that time, a 91-year-old person who was selected by the lottery passed away, so I thought I might get an opportunity to go instead,” she said.

“If North and South Korean politicians understood the feelings of war-torn families, they would have held the reunions of course - and have unified already,” Cho continued. “If I can see my sister’s face one last time, I would not regret passing away that evening.”

The group of eight interviewees all agreed that if both leaders and politicians in Seoul and Pyongyang truly took into account the pain of war-torn families, they would not allow the reunions to fail.

These senior citizens are now weary of false hopes but can’t abandon their dreams of seeing beloved family members one last time.

Shim Min-seob, an 82-year-old resident of Yeomchang-dong, Gangseo District, western Seoul, has been searching for his older brother for the past 70 years.

“Politicians and bureaucrats really need to take a proper look at what the people want,” he says. “We waited for such a long time. Now, we are too much in pain and do not have the strength to move.”

Shim criticized both governments for being too focused on politics. “I have not given up on the family reunions,” he says, “with the wish to at least be able to see my brother’s children.

“I’ve lived through very difficult times and that time is coming to an end.”

Lee Yeong-sam, 70, was born in the year of Korea’s liberation. When he was a child, he was separated from his mother and little brother while crossing the Taedong River in North Korea in January 1951, when North Korean and Chinese forces captured Seoul.

Lee has applied to join the reunions numerous times but has also not been selected. “There are many applicants and priority is given to the most elderly, so I’ve been told to wait numerous times,” he says.

“I looked forward to possible North-South government talks in January. After being given so much anticipation for unification, I feel like I am under the torture of false hopes,” he says.

“But I could want nothing more than to find my mother still alive,” he added through tears.