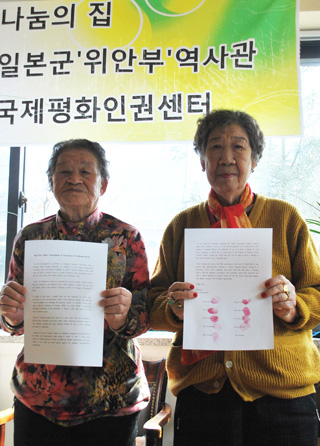 Two local survivors, who were coerced into Japanese military brothels to serve as sexual slaves during World War II, hold up their letter of gratitude to U.S. scholars on Tuesday at the House of Sharing in Gwangju, Gyeonggi. They were accompanied by eight others who thanked 19 American history professors for announcing earlier this month that they would issue a statement expressing dismay toward Japanese Prime Minister Shinzo Abe for seeking to eliminate references to sexual slavery in American textbooks. [NEWSIS]