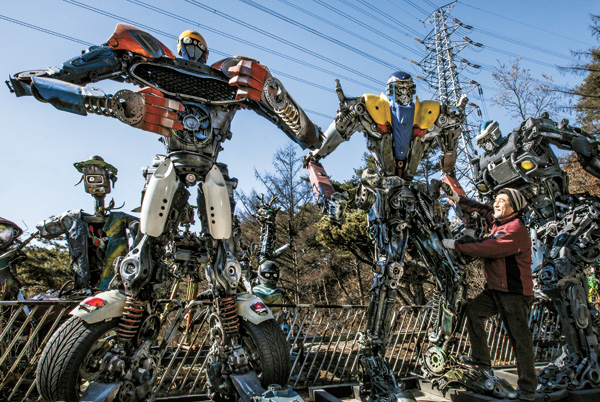 Oh Dae-ho, a junk artist, works on a robot 3 meters (10 feet) tall at his junk art gallery in Eumseong County, North Chungcheong. The robot is made out of industrial waste such as old motorcycle parts.By PARK SANG-MOON

EUMSEONG, North Chungcheong - In this place, every kind of creature exists: Children are created with screws and ball-bearings, a dog is brought to life with welding spikes, a snail is made by layering winnowing fans.

Heungbu and Nolbu, the protagonists of a famous Korean folk tale, and a mantis made from circuit boards are installed on its back. But among the best sculptures in this workshop, the robots - those tiny and huge - are most eye-catching.

This is what Oh Dae-ho’s atelier looks like. His workspace-cum-gallery is located on a Gaseop mountainside in Eumseong County, North Chungcheong, and is consistently packed with industrial waste - machine parts, old tires.

Although the weather is bitterly cold, Oh, 61, spends each day at his workspace to prepare for his next exhibition.

The artist was formerly a successful businessman who ran a plastic recycling factory in the early ’90s after graduating college with a degree in mechanical engineering. However, he had to close down his factory after regulations unexpectedly changed. But as he indulged the idea of taking a hiatus, a magazine article about junk art caught his eye.

“It was an article about an artist in New York who installed a huge sculpture made with waste that cost nearly 2.7 billion won [$2.4 million],” Oh explained.

“I calculated how much it would cost to make a sculpture like that, and 50 million won seemed enough to me. I thought, ‘junk art is for me,’ and prepared a workshop and a small truck because I was confident in my talent and knew I could make anything I wanted.”

But it wasn’t an easy start, and the artist admitted he faced a number of hurdles in the beginning.

Apartment complex guards frequently shooed him away when he tried to sift through the recycling for his sculptures. He wasn’t eating at consistent times, causing him severe stomach problems, and his body was covered in wounds from handling heavy iron. 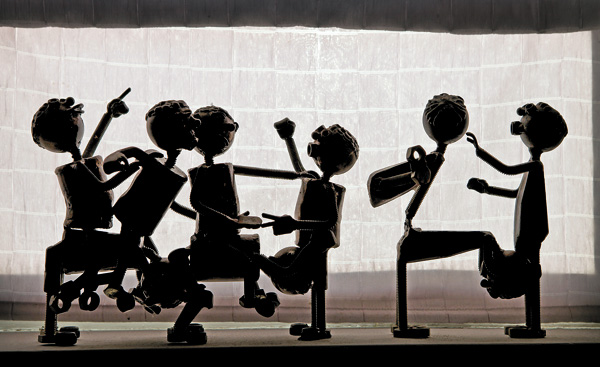 Oh also started suffering from progressive aphasia around the time he began concentrating on his art and isolating himself from others.

But after some time, by chance, he received his first true break when a local broadcaster ran a 15-minute program featuring his workshop as the nation’s first junk art gallery. Once the program was televised, Oh’s name was made.

The program’s producer also happened to be the son of a man whose cultivator Oh had once helped repair.

Around then, Oh received his first order from Anyang City Hall. Officials there asked him to make a robot to install in front of its garbage incinerator.

That moment - selling his first piece for 5 million won - is still unforgettable, he said, and one of the most overwhelming moments in his life.

Soon after, Seoul City Hall and Chuncheon City Hall placed orders, and a gallery in New York bought one of his sculptures for 50 million won.

As his reputation caught on, so too did the number of those who came to visit his workshop.

So far, Oh has made about 6,000 sculptures and plans continue his work until he completes 10,000 pieces. That final moment when a sculpture is finished is the most rewarding, he said, adding that he plans to open more exhibits to reach out to a wider audience.

These days, he’s busy designing sculptures for his next exhibitions, to be held in March and July. His robots will be the primary focus.

“Robots are the future, and children love them,” Oh said. “And their forms are various. Some of the robots I made were inspired by the characters in Korean fairy tales, like ‘Heungbu and Nolbu’ and ‘Simcheong.’”

He added that his purpose in making his robot creations was to bring children joy.

“I’m proud of myself for helping to enhance children’s creativity,” he said.

“My final wish is to make a sculpture to be featured in a global art textbook,” Oh added with a smile.