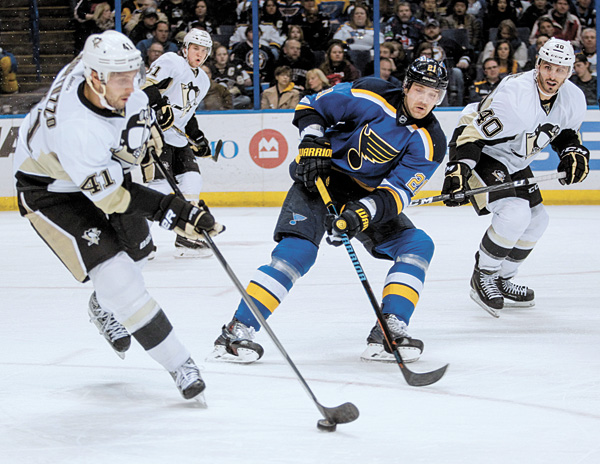 Pittsburgh Penguins’ Robert Bortuzzo, left, and St. Louis Blues’ Patrik Berglund, of Sweden, center, fight for the puck during the second period of their NHL game on Saturday in St. Louis. [AP/NEWSIS]

Even with skilled stars like Sidney Crosby and Evgeni Malkin in the lineup, the Pittsburgh Penguins were in a scoring slump when they arrived in St. Louis.

Blake Comeau changed that Saturday night with two goals and an assist in a 4-2 victory over the Blues.

The win snapped a three-game skid in which Pittsburgh had managed only one goal in each game. Comeau said the Penguins just got back to basics.

“I think we did a lot of things we’ve been preaching over the last couple weeks,” he said. “Getting guys to the net, and the specialty teams came up big. All in all, we’re happy we got the win. I thought we played well tonight.”

Patrick Hornqvist and Brandon Sutter also scored for the Penguins. Crosby got his 40th assist on Hornqvist’s goal.

“It’s been tough,” Crosby said. “We’ve played and battled, but I think we’ve been at one [goal] for three games, so yeah, it’s nice to get four and generate some chances.”

Pittsburgh is 12-4-2 against Western Conference teams and 5-1-1 in its last seven road games.

Playing in place of starter Marc-Andre Fleury, backup goalie Thomas Greiss proved up to the challenge. Greiss stopped 21 shots and had the Blues shut out until giving up a goal to Dmitrij Jaskin with 5:27 left.

“It was a different game today,” Greiss said. “I had a lot of shots where they just walked in, so you have to challenge them and take the angle away. It was a little different game than the last couple.”

Although Fleury has been playing well, Comeau said the Penguins had no problem seeing Greiss in net.

“When he’s in, we have a lot of confidence in him,” Comeau said. “There are a few things there at the end we’ve got to clean up, but he played outstanding for us tonight.”

Ian Cole added a goal for St. Louis on a one-timer at 18:38. Vladimir Tarasenko assisted on both Blues goals, and Brian Elliott made 25 saves.

Elliott was hard on himself afterward.

“It starts with me, obviously, in net,” he said. “I want to give your team a chance to win and when you keep getting scored on throughout the game, it’s got to come to a stop.”

Blues rookie defenseman Petteri Lindbohm made a costly mistake, one night after scoring his first NHL goal in a 5-1 win over Boston.

Attempting to clear the puck from behind his own net late in the first period, Lindbohm tried a pass that was intercepted by Comeau. He walked in front and beat Elliott with a backhand at 16:31.

Pittsburgh extended its lead with two second-period goals. Tarasenko was off for holding when Crosby found Hornqvist in the slot and he beat Elliott at 6:26. Comeau then scored his 14th of the season when he re-directed Simon Despres’ shot from the point at 15:38.

“Obviously, that fourth goal can’t happen,” Elliott said. “We managed to get two goals, so it came down to a couple in the end instead of one. You don’t like giving up goals like that.”

Meanwhile, Evgeny Kuznetsov scored the lone goal in a shootout, Braden Holtby had 30 saves and the Washington Capitals beat the New York Islanders 3-2 Saturday for their fourth straight victory.

After the first-place Islanders forced overtime by scoring with goalie Chad Johnson on the bench, Kuznetsov followed OT by beating Johnson on the first attempt of the shootout.