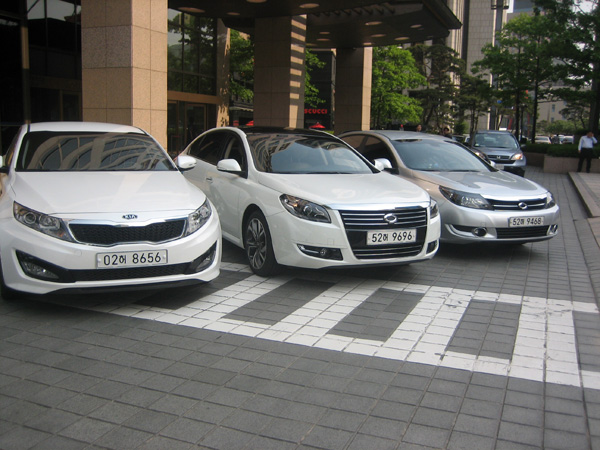 Rental car with a contract exceeding more than a year have been gaining wide popularity as last year KT Kumho Rent-A-Car, the nation’s No.1 car rental company, rented out more than 23,800 vehicles, which is a sharp increase from the 1,500 vehicles five years ago. [JoongAng Ilbo]

This year, Woo Seong-yong, 42, quit the job he held for a decade to start a new career as an insurance salesman. As a result he spends a lot of time on the road traveling from one client to another.

The long drives led him to start looking into buying a car with better fuel efficiency. But after talking with a friend, Woo decided to rent an LPG-fueled Hyundai Sonata on a long-term basis instead of purchasing a new car.

It seemed like a good choice because LPG costs less than regular gas, has good fuel economy and renting long-term is cheaper than buying.

According to the rental industry, LPG is 50 to 60 percent cheaper than regular gas.

The rental company also manages details of driving that Woo would have to personally attend to if he bought a car, including maintenance and insurance payments.

“Not only was the economic aspect satisfying but I also liked that the rental company was managing the vehicle,” he said. “If I were to buy a new LPG vehicle, it would have been near impossible.”

Consumers can buy an LPG truck or van, but LPG passenger cars can only be either rented, sold for commercial use, or driven by handicapped drivers or drivers with a national merit.

According to the law, ordinary consumers can only purchase a second-hand LPG passenger car if it was previously owned by a handicapped driver or a driver or a merited driver for more than five years.

In recent years, trends have been changing in the automotive market as more consumers choose to rent a car on a contract of at least a year rather than buy a new vehicle.

The rental business attributes the recent change to long-term economic stagnation, which has driven consumers to cut back on spending.

Many people, like Woo, see renting a vehicle as more affordable than owning one. The change is unusual because previously, most drivers in Korea only rented cars for business trips or vacations.

Data compiled by the nation’s No. 1 rental car company KT Kumho Rent-A-Car and obtained by the JoongAng Ilbo, showed that in 2009, individuals rented out a total of 1,543 cars. That figure surged to 23,822 cars last year.

KT Kumho Rent-a-Car as of the third quarter of 2014 has the largest market share among local rental companies, with 26.4 percent. This is almost two times bigger than runner up AJ Rentacar, whose market share is 13.4 percent.

The rental market by value is estimated to be worth 3.7 trillion won ($3.35 billion) last year. This year the industry is expecting it to grow further with the total number of rental cars increasing to more than 485,000 units and the market expanding to 4.2 trillion won, up 14 percent year-on-year.

Korean cars were the most popular rentals, accounting for 96.3 percent, or 422,912 vehicles, while imported brands accounted for 3.7 percent, or 16,159 units. Although its market share is still low, the popularity of import rentals has soared over the past two years. 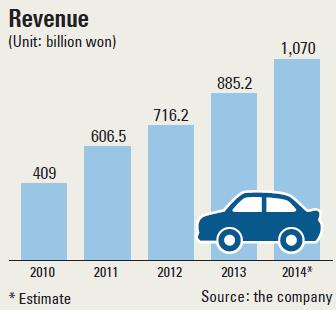 By fuel type, many renters look for LPG-fueled cars, accounting for the biggest portion, 42.2 percent, or 185,074 vehicles. Gasoline came in second with 32.5 percent followed by diesel with 24.1 percent. Hybrid car rentals only took up 1 percent of the total that were rented out last year.

When broken down by model, Hyundai Motor’s Sonata was the most popular Korean car, with more than 70,000 rented out, or 16.6 percent of the total. The Hyundai Grandeur took the second spot with 56,000 vehicles, or 13.3 percent, followed by the flagship vehicle of the automaker’s affiliate Kia Motors’ K5.

German cars were the most borrowed foreign brand. BMW’s 5 Series topped the list, with 2,256 rented, accounting for 14 percent of total import rentals. Mercedes-Benz’s E-Class took the second spot close behind BMW with 2,230 units rented. Audi’s A6 was third with 1,511.

According to the study by KT Kumho Rent-A-Car, renting a vehicle on a multi-year contract is 5 to 10 percent cheaper than buying a new car because the owner does not have to pay insurance separate from their monthly car payment.

The driver also does not have to worry about the value of the vehicle declining and they have the option to buy the car when the contract expires or switch to a different car.

Korean’s perception of rental cars has changed as well. They used to be looked down on but have now taken on a new image as a car driven by a successful entrepreneur or an executive, since many companies rent cars to high-ranking officials.

The rental car company said that renting a car on a contract that is longer than a year results in better value, and that most customers sign a three to four year contract.

KT Kumho Rent-a-Car data showed that 56.3 percent of individuals who rented a vehicle were on a four year contract and 30 percent were on three years.

The number of companies signing up for rental services has also grown significantly in recent years. In 2009, 33,065 cars were lent to corporations. That figure doubled to 65,994 vehicles last year.

Most corporate customers were small and midsize companies, where maintenance service is important.

The rental company analyzes data it collects on the vehicle to maximize efficient use of the cars that are borrowed for business purposes and help reduce management and maintenance costs.

The GPS system that tracks the route traveled by the vehicle ensures the renter that it is not being used for non-work related matters.

“It’s not just simply renting a business-purpose car,” Choi said. “The service is easier because management solutions are provided for the vehicle.”

With the number of individual and corporate clients growing, the influence of long-term rentals is also boosting the company’s revenue. A total of 89,816 vehicles are out on rental contracts of more than year, accounting for 79 percent of the vehicles owned by the company.

According to the company, 85 percent of its total revenue comes from long-term rentals.

One of the reasons that demand for rental cars is because it is a cheap way for drivers to change their vehicle more often.

“My family also welcomes the use of rental since we don’t have to pay a huge lump sum like we would when buying a new car and we can easily change to a different vehicle,” said 40 year old office worker Kim Seong-min, who recently rented a Grandeur for three years with a monthly payment of 750,000 won.

But as more people make the jump to rental cars instead of buying, there has been concern over the shrinking tax collected from new car purchases and the impact it has had on related business including car insurance and accessories.

Despite the worries, the market for rental cars is expected to continue to expand.

According to the Ministry of Land, Infrastructure and Transport and Korea Investment & Securities, among the total number of registered vehicles in the country, rentals only account for 2 percent, or roughly 430,000 units. That’s far lower than the 7 percent rented in the United States and 4.2 percent in Japan.

Hwang Chang-seok, an analyst at Shinyoung Securities, noted in a recent report that the rental car business is a rapidly growing market with annual average growth of 16.3 percent.

As a result, several automakers are looking for marketing tools to grab consumers while others are signing strategic business deals with the rental companies.

Auto companies aren’t the only one trying to profit from the growing rental car business, as even non-banking financial companies like Hyundai Capital, which struggled last year, have been stepping up on their marketing to offer financial products related to car rentals. The affiliate of the nation’s largest automaker Hyundai Motor Group runs its own rental business.

Aju Capital last year entered the rental car business and Shinhan Card in August announced it would also join in, and has received approval from its shareholders.