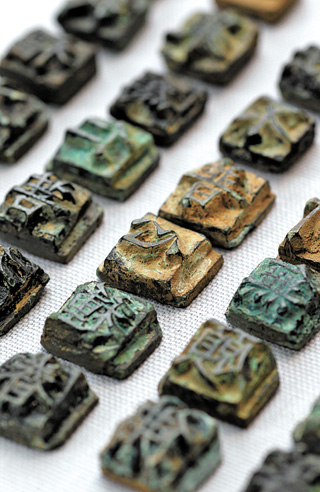 A debate that emerged several years ago among Korean historians has been thrust into the spotlight again recently.

State authorities announced earlier this month that they will attempt to verify if the allegations are true that movable metal type found in the 2000s was made before 1239.

Koreans and historians worldwide have long believed that the world’s oldest movable metal type dates back to 1377, when “Jikji Simche Yojeol,” a book that contains the essentials of Zen Buddhism, was printed in Korea using movable metal pieces. “Jikji” is on Unesco’s Memory of the World list.

But in 2011, a startling allegation surfaced.

An antique dealer named Kim Jong-chun claimed that he found Jeungdogaja, which was older than “Jikji.” Kim, who is chairman of the Korean Ancient Art Association and director of Daboseong Ancient Art Museum, said that historical records support the theory that there was movable printing type before “Jikji.”

For years, he’s been presenting the results of scientific tests that prove the type is from before 1239, as many have questioned the authenticity.

In 2011, he announced the results of carbon dating conducted by a research institution that showed the metal pieces were indeed from the early 13 century; and in 2013 the result of another test by Seoul National University that also showed they were from between 1150 and 1300.

As the debate showed no sign of ending, and considering the gravity of the claim, the state-run National Research Institute of Cultural Heritage last year asked a research team at Kyungpook National University to conduct a third test.

That test concluded that the ink on Jeungdogaja was from between 1033 and 1155, and the government could no longer ignore Kim’s claims.

The Committee for Cultural Heritage within the Cultural Heritage Administration decided in a meeting on Feb. 12 that it will create a review board to deliberate whether Korea will designate the Jeungdogaja as a national treasure.

They have yet to decide who will be on the board and the time period for discussion.

Many in Korean academic and historical circles discredit Kim and his claims because of the loopholes in carbon dating and because Kim has a bad reputation.

“It’s really easy to manipulate the carbon dating of a relic,” one insider said, “and that is why the results of carbon dating alone aren’t enough to [prove that Jeungdogaja is the oldest movable metal type].”

In interviews with local daily newspapers, Kim said he was frustrated by how the type he found in the early 2000s is under intense scrutiny because of his track record of dealing with stolen treasure and manipulating prices of artifacts.

He said it’s unfair that Korean academia is refusing to believe him because he’s a dealer and not a scholar.