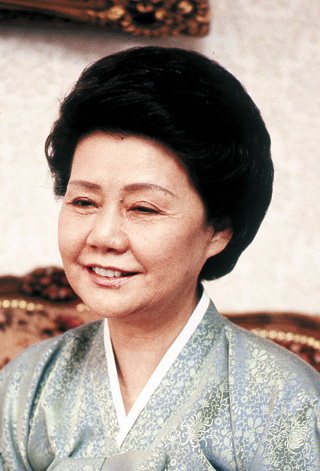 Park Young-ok, the wife of former two-time Prime Minister Kim Jong-pil and cousin to President Park Geun-hye, died on Saturday. She was 86.

Kim’s family members confirmed that Park passed away after a long battle with urethral cancer and had suffered from spinal stenosis.

A mourning altar has been set up at Asan Medical Center in southeastern Seoul.

Park and Kim wed in the midst of the Korean War in 1951, and remained married for 64 years.

She is the daughter of Park Sang-hee, the older brother of former President Park Chung Hee.

President Park Geun-hye is the oldest child of the former strongman, who has another daughter and son.

Since her death over the weekend, politicians across party lines have conveyed their condolences, a testament to the profound and long-standing influence Kim had on the country’s political landscape.

Kim Jong-pil was the first chief of the nation’s main spy agency, now the National Intelligence Service. He is also widely credited with Kim Dae-jung’s election as president in 1997, after he formed an alliance with the late president’s Democratic Party, the predecessor to the current New Politics Alliance for Democracy (NPAD). 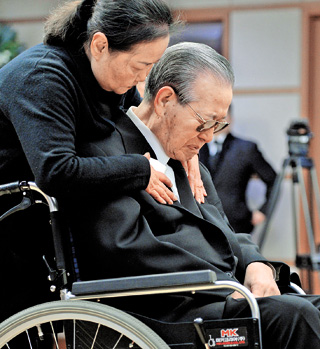 The guest list at the mourning altar on Sunday included the outgoing presidential chief of staff, Kim Ki-choon; newly appointed Prime Minster Lee Wan-koo; as well as Kim Moo-sung and Moo Jae-in, the respective chairmen of the ruling and opposition parties.

Greeting guests in a wheelchair, the elderly Kim, who suffered a stroke in 2008, asked the outgoing presidential chief of staff to continue watching over President Park, now in her third year in office.

“Visit her from time to time so that she won’t feel lonely [at the Blue House],” he told him, adding that the presidency is often accompanied by a sense of isolation. “She has inherited good characteristics from her parents … strong judgment and determination.”

President Park had a wreath delivered to the altar, though has yet to visit.

Over the course of Kim’s nearly 50-year political career, Park Young-ok assisted her husband both personally and professionally, playing the traditional role of a devoted wife.

She campaigned for her husband when he was taken into custody by Chun Doo Hwan’s military government in 1980 on dubious corruption charges and aided in the election campaigns of candidates from the now-disbanded United Liberty Democrats, the political party founded by her husband.

Park is survived by her husband, one daughter, 64, and one son, 54. She will be laid to rest on Wednesday in Buyeo County, South Chungcheong, where her husband was raised.