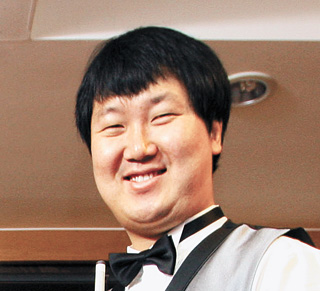 World class three-cushion billiard player Kim Kyung-roul was found dead on Sunday in what police suspected was a suicide.

Kim, who leaves behind a wife and a young daughter, would have turned 35 on Monday.

According to the Goyang Police Station, Kim’s body was found in front of his parent’s apartment in Haengsin-dong, Goyang, Gyeonggi, at about 3 p.m. on Sunday. He was visiting their home for the Lunar New Year holiday.

Although the case is still under investigation, police said that there is no sign that Kim could have been murdered and they believe that Kim jumped from 20th floor of the apartment building. His parents were reportedly sleeping when the incident occurred.

“So far, we suspect a suicide,” a Goyang police officer said. “In these apartments, there is at least a 1-meter (3-foot) high banister and since the space between each pillar is small, it is difficult for an adult to fall from the balcony accidentally.”

Police said they had not found a suicide note. An autopsy will not be conducted following a request by Kim’s family members.

However, the Korea Billiard Players Association and Kim’s supporters say that he accidently fell from the balcony because there would be no reason for him to commit suicide.

Kim, who was champion of the 2010 Three-cushion World Cup in Antalya, Turkey, was about to celebrate his 35th birthday on Monday, and had signed a sponsorship deal with Iwan Simonis, a global company that specializes in making cloth for billiard tables, just two weeks ago.

Kim, who began his professional career in 2003, was considered to be the best Korean billiards player. He was the first to win a three-cushion world cup.

Kim once reached No. 2 in the world ranking and came in 2nd place twice at the World Cup.