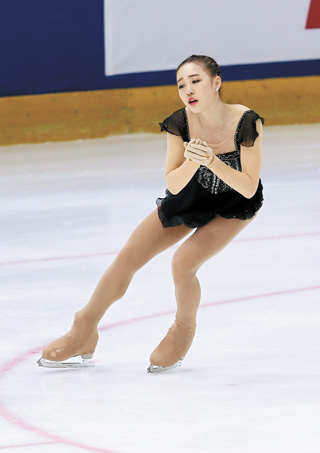 Last Monday, a photograph of Park So-youn was the talk of the town among Korean web surfers. In the photo, she was eating tteokbokki (spicy rice cakes) with fellow figure skater Li Zijun of China who also has many fans in Korea.

“I don’t why she posted that photo on her SNS,” Park said timidly. “We talk in English when we meet and talk about puppies since we both raise them.”

Off the ice, Park looks like an average 17-year-old high school student, but along with Kim Hae-jin, she is one of the top prospects to succeed legendary skater Kim Yu-na.

Park, who attends Shinmok High School in Mokdong, western Seoul, has risen to the top this season while participating in senior-level competitions.

In the Four Continents Figure Skating Championship held in Korea earlier this month, she finished ninth. But at both Skate America and the Rostelecom Cup, which are part of the International Skating Union (ISU) Grand Prix of Figure Skating, Park placed fifth, which was the best performance by a Korean female skater besides Kim Yu-na.

“Because it was held at home, I felt a lot of pressure in the Four Continents competition,” Park said. “But as I look back, I have really grown compared to last year. In the past, I made mistake after mistake whenever I felt pressure. But now, I can execute my next move calmly.”

Park first tried on ice skates when she was in first grade at Naju Elementary School in South Jeolla. Two years later, she moved to Seoul to pursue her figure skating career.

Maybe she was gifted with athleticism and expression from the start - her father was cyclist and her mother majored in Korean traditional dance. By the time Park was 13, she represented Korea and could execute all the triple jumps except for the triple axel.

Park’s daily routine starts at 7:30 a.m. with a Pilates session, followed by three-and-a-half hours of training at Taereung Ice Rink in Seoul. In the afternoon, she does weight training and also takes ballet and contemporary dance lessons to practice her choreography.

Because of the tight schedule, she can only go to school about four days a year, usually when there’s an exam, which Park said makes her jealous of the “normal” students.

“Studying for exams is difficult, and sometime I want to study at a desk,” she said. “I also envy when my friends hang out together.”

Park also doesn’t usually get to enjoy snack foods like tteokbokki because her mother organizes a healthy diet for her.

However, Park said she doesn’t regret choosing the life of figure skater.

“I have already had experiences that others can’t easily have,” she said. “There’s also pride and joy when I get good scores.”

Although she is known for her smile while performing, Park says she has become more introverted since becoming serious about skating due to the intense training.

“When I feel tired and stressed, I listen to classical music,” she said. “I also enjoy entertainment programs like ‘Running Man’ and if there is an opportunity, I want to appear on it.”

For Park, Kim Yu-na is an idol, teacher and role model and says the 2010 Olympic champion is “the most beautiful skater.” With people referring to Park as the “post-Kim Yu-na,” the Naju-born skater says she feels pressure, but is also thankful for the compliment.

“Yu-na has told me to believe in myself, but what I really want to reflect is her confidence,” she said.

Park is now looking ahead to the 2018 Pyeongchang Winter Olympics.

“I haven’t visited Pyeongchang yet, but I always imagined myself in the Pyeongchang Winter Olympics, getting big applause from the crowds after a clean performance,” she said.