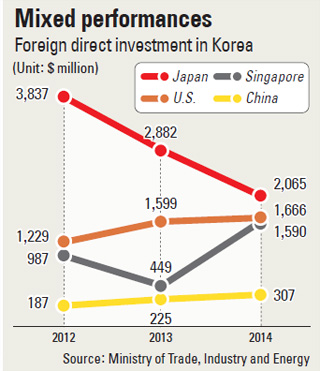 The Korean government is planning to develop business zones in Saemangeum and Iksan in North Jeolla targeted at Chinese food and fashion companies to coincide with the start of the free trade agreement (FTA) between the two countries at the end of this year.

The government is emphasizing the geographical closeness of Korea’s west coast and China.

“After the Korea-China FTA reached last year raised the level of Korea’s free trade platform, foreign companies can do global businesses here in Korea,” Yoon Sang-jick, minister of trade, industry and energy, said at a ceremony on Monday. “Korea will be a great business hub that enables foreign companies to target the Chinese market in a more cost-efficient way, and vice versa for Chinese companies that want to go abroad.”

Yoon invited some 20 CEOs of global companies to the COEX Intercontinental Hotel to lay out the government’s plan to encourage more investment by foreign companies this year.

Since Chinese consumers have a rising interest in products manufactured in Korea, companies may want to produce goods in Korea to take advantage of duty free access to the Chinese market once the FTA goes into effect.

The Korean government will select 10 promising business projects in food, fashion and cultural content industries and a list of potential Chinese business partners for the zones by April.

A Korea-China Economic Cooperation Business Complex is being discussed between the two governments to be located on the reclaimed land of Saemangeum, said an official at the Trade Ministry.

The Iksan cluster, which will be about 3.6 million square meters (1.4 square miles) in size, is already under construction to be completed by 2017. More than 10 R&D centers in product development, food safety and packaging will join the food business cluster, and local and global food companies including CJ, Dongwon F&B, Harim, Chinese high-end food retailer Clever Mama and Hampton Grains are also scheduled to enter.

The Korean government hopes to attract investment from China and also Singapore and Hong Kong. Those countries have been increasing their investments in Korea over the past few years.