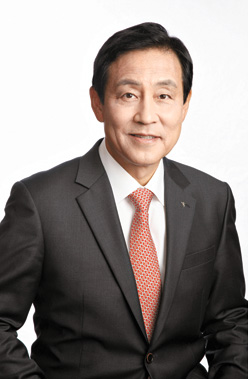 
Kim Jung-tai, chairman of Hana Financial Group succeeded in extending his post as leader, the group said on Monday.

The group’s chairman recommendation committee chose Kim as the best candidate in a meeting held at its headquarters in Euljiro, central Seoul.

The seven-member committee agreed that the current chairman should remain in the top position in order to push ahead with the halted merger between Hana Bank and Korea Exchange Bank. The move has been delayed due to opposition from the trade unions of both institutions and is also pending approval from the financial authority.

Kim is considered a successful chairman after leading the group in an organized manner for the past three years. Under his stewardship, Hana Card successfully merged with KEB Card.

Hana and KEB merged their operations in Indonesia in 2012 and branches in the country now function under the name PT Bank KEB Hana.

If the board approves Kim’s nomination early in March, he will start his second term later that month.

However, it seems like Kim’s second term may be a rockier journey as he faces a number of hurdles.

Hana’s trade union is opposed to the chairman serving a second term due to his push for Hana’s integration with KEB.

The financial mega deal dates back to 2013. KEB started as a state-owned financial entity until it was taken over by its majority shareholder Hana. The top management of Hana and KEB agreed to a proposal to swap the remaining 40 percent stake in KEB for Hana’s shares.

A KEB shareholder could swap 5.28 shares for a single share of Hana Financial Group.

Since then, the two institutions have been preparing for a merger.

The merger accelerated after Kim mentioned in a press conference last year that he thinks it is time to discuss the integration of the two.

The process initially seemed to be proceeding smoothly but opposition from the labor unions remained strong. The Financial Services Commission said an agreement between labor and management is necessary before it will approve the merger.

KEB’s union filed an injunction with a court last month in Seoul, demanding a halt to the merger. The court ruled in its favor, delaying the merger until June.

Hana and KEB had planned to complete the merger by February.

FSC Chairman Shin Je-yoon has supported the merger of the two banks, but Shin will be replaced by Yim Jong-yong, the current chairman of Nonghyup Financial Group, next month. Yim’s stance on the deal will also play a role in determining the institutions’ fate.