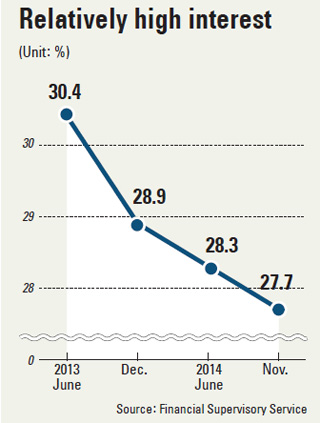 A majority of the savings banks that were purchased by private loan sharks have continued to offer risky loans with high interest, especially to college students who have greater difficulty repaying their debt.

According to a study by the Financial Supervisory Service (FSS) released Monday, among the 25 savings banks that were purchased by private lenders, 20 were giving exceptionally high interest credit loans with no collateral. Banks engaging in such practices include Welcome Savings Bank, which was launched in November after private lender Welcome Creditline acquired and merged two savings banks, Yeshin and Seoil, in April and June, and OK Savings Bank, which opened the same month.

In its report, the FSS noted that these privately owned savings banks have made it their specialty to offer small loans with high interest.

The report stressed that these savings banks have been marketing a unilateral high interest on all loans instead of offering a variety of products that apply different interest rates depending on the borrower’s credit level.

“Some of these savings banks have been concentrating on marketing credit loans without collateral, especially to college students who are burdened by the high interest,” said an FSS official. “Such practices could distort the role of the savings banks as financial institutions that aid people who have difficulty taking out loans from commercial banks.”

According to the most recent data from November, the savings banks were offering a credit loan with an interest rate between 24.3 percent and 34.5 percent and even loans to college students had a high rate of 27.7 percent.

The practice has continued despite the decreasing key interest rate and the central bank’s loose monetary policy.

Overall existing loans to college students as of November stood at 207.4 billion won ($226.8 million). This is 17 percent smaller than the 251.6 billion won recorded at the end of the first half of 2014. During the same period, interest rates on those loans shrank from 28.3 percent to 27.7 percent.

With the interest rate at savings banks staying relatively high, overdue payments by debtors have been rising. As of November, the overdue payment rate was 10.3 percent, an increase from the 9.1 percent in June and the 8.6 percent rate recorded in December 2013.