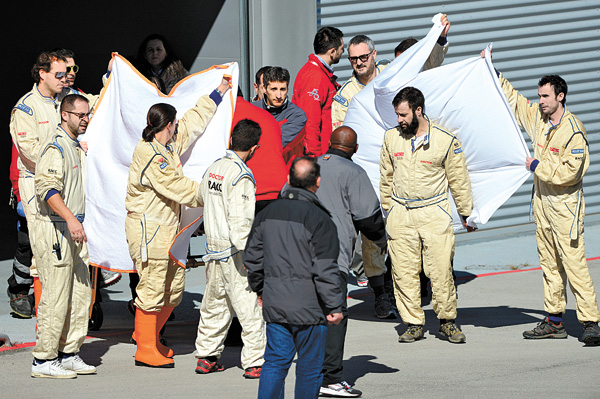 Medical staff hold up sheets around Fernando Alonso after he crashed during testing at a racetrack in Montmelo, Spain, Sunday. [AP/NEWSIS]

MONTMELO, Spain - McLaren’s troubled preseason almost took a tragic turn Sunday when Fernando Alonso was concussed in a crash during Formula One testing.

Alonso was airlifted by helicopter to the hospital after his McLaren went off the track and collided with the wall at the Barcelona-Catalunya circuit.

McLaren said the two-time former world champion was “conscious and able to speak’’ while receiving first aid at the circuit’s medical center, but that he was taken to hospital for “precautionary checks.’’

The team later added that Alonso was “uninjured’’ after several hours of tests and observation. McLaren said “he was given CT and MRI scans as precautionary measures. He was uninjured, but will remain in hospital.’’

Team director Eric Boullier said that Alonso received a concussion from the accident.

“Fernando’s accident was just one of those things that happens in testing,’’ Boullier said. “Fortunately, he’s fine, but was concussed during the accident, which therefore required an overnight stay in hospital as a precaution. That’s normal practice after a concussion.’’

The Spaniard crashed after completing 20 laps. The accident occurred at turn three, when Alonso went off course and the right-hand side of his car hit the wall.

Neither the team nor track officials have reported the cause of the crash. Boullier said the car was not badly damaged. McLaren did not specify Alonso’s speed at the time of the crash.

The 33-year-old Alonso rejoined McLaren this season after a disappointing fifth and final campaign with Ferrari. He won back-to-back world titles with Renault in 2005 and 2006 before spending one season at McLaren in 2007.

Alonso has 32 career grand prix victories, the last of which came here at Montmelo in 2013.

Testing resumed at the track after a slight delay following the lunch break.

Sainz Jr. and Mercedes’ Nico Rosberg said the track was very windy, although neither mentioned any connection to the crashes.

“It was difficult to understand in the car because every run was different from corner to corner,’’ Rosberg said. “Depending on where the wind was coming from, the car felt totally different. So it really made testing extremely tough today. Even the sun was making it tricky at the end once the wind dropped down, as it was just on the horizon. Some of the corners were absolutely blind so you just had to commit to it by memory.’’