Microsoft plays catch up in mobile with Windows 10

Microsoft plays catch up in mobile with Windows 10 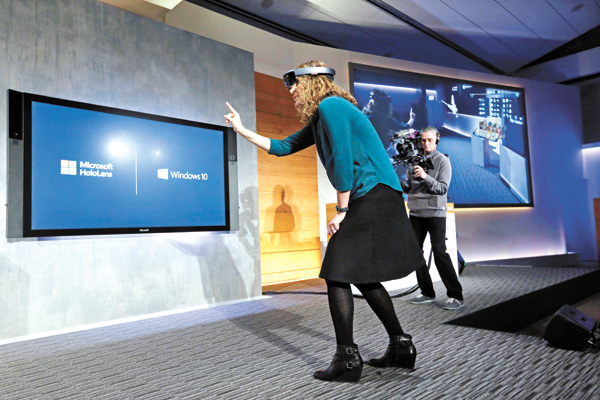 Microsoft’s Lorraine Bardeen demonstrates a hologram device as what she sees is projected on a screen behind her at an event demonstrating the new features of Windows 10 at the company’s headquarters on Jan. 21. [AP/NEWSIS]

Microsoft last month released its next generation operating system Windows 10, an all-in-one OS that can be applied to PCs, smartphones, tablet PCs and mobile phones.

But the most attractive feature is that Microsoft is distributing the new operating system for free. Previously, the company charged users a fee to upgrade their OS but it decided to make the latest product free for a year for users of Window 7, Window 8.1 and Window Phone 8.1.

The company is also hoping that the free software will help increase its market share in the Internet of Things and wearable markets. 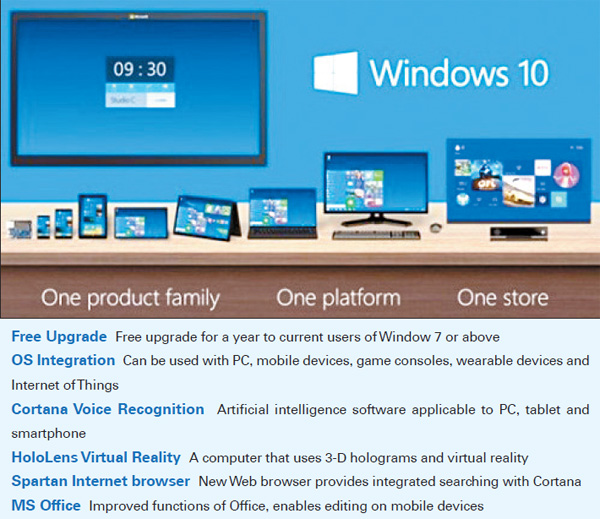 In addition, unlike previous OS versions, Windows 10 has been specifically designed to be highly compatible with devices besides PCs, according to the company.

“Windows 10 marks the beginning of the more personal computing era in the mobile-first, cloud-first world,” said Microsoft CEO Satya Nadella. “Our ambition is for the 1.5 billion people who are using Windows today to fall in love with Windows 10 and for billions more to decide to make Windows home.”

When a user turns on their PC or mobile device and makes a request by voice, the device will automatically surf emails and the Internet to find results.

It first debuted on the Windows Phone last year as a personal helper that learns the user’s preferences so it can provide relevant recommendations quickly, as well as important reminders.

Cortona is only available in English and the company is still deciding which language it should develop next.

Windows 10 also features the new Microsoft browser Spartan to replace Internet Explorer. Users can type, write with a stylus, or speak out loud to search on Spartan, which is integrated with Cortana for a more natural interaction.

It also launched a version of Microsoft Office for Windows 10 referred to as universal apps, which have more functions optimized for touch-screen devices. Users can even create and update Excel spreadsheets without a keyboard and mouse.

The universal apps include new versions of Word, Excel, PowerPoint, OneNote and Outlook built for touch.

During the Windows 10 Live Event, the company also showed what Windows 10 will look like on HoloLens, a virtual reality headset with see-through lenses that merges digital and physical content. Windows 10 will be the world’s first holographic computing platform.

The new Microsoft HoloLens is the first untethered holographic computer which does not need to connect to a phone or PC. It has high-definition lenses and spatial sound so users can see and hear holograms.

Microsoft has also launched an updated Xbox app for Windows 10. The app will bring new experiences to gamers and developers and Microsoft will give updates every month based on users’ feedback and ideas.

With Windows 10, players can enjoy new games with friends across devices and worldwide. They can also play games streamed directly from their Xbox One to their Windows 10 tablets or PCs.

According to Microsoft, games developed for the new DirectX 12 programming interface in Windows 10 will have improved speed, efficiency and graphics.

Another feature of Windows 10 is Continuum mode, which moves easily between keyboard and mouse and touch on 2-in-1 devices, by detecting the change.

The built-in universal app means the user can start something on one device and continue it on another by storing and syncing the content, such as photos, videos, music, messaging and emails, through OneDrive.

“Everything about Windows 10, the experiences, delivering it as a service and the free upgrade, means that Windows 10 isn’t just another product, it’s an ongoing relationship that will give ongoing value to all our customers,” said Terry Myerson, executive vice president of Microsoft’s operating system group. “The new generation of Windows is a commitment to liberate people from complex technology and enable them to do great things.”

The Windows 10 technical preview for PC was released free on Windows Insider and the phone version will be made public at the end of this month.