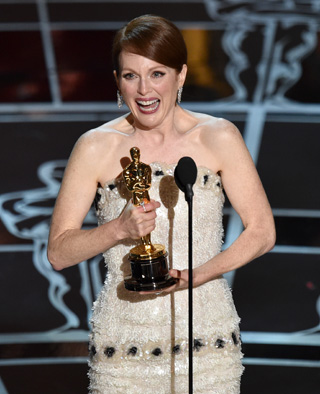 Julianne Moore accepts the award for best actress in a leading role for “Still Alice” at the Academy Awards on Sunday in Los Angeles. [AP/NEWSIS]

LOS ANGELES - “Birdman’’ captured Hollywood’s top honor at the Academy Awards on Sunday, where the jazzy, surreal comedy about an actor fleeing his superhero past won best picture at a ceremony punctuated by passionate pleas for equality.

On a stormy night in Hollywood, the 87th annual Academy Awards - which came in humbled by backlash to its all-white acting nominees - bristled with politics and heartfelt speeches about women’s rights, immigration, suicide prevention and race.

Oscars voters opted for a movie that epitomizes much of Hollywood - showy, ego-mad, desperate for artistic credibility - over one (“Boyhood’’) that prized naturalism and patience. “Birdman (or The Unexpected Virtue of Ignorance)’’ also won best director for Mexican filmmaker Alejandro Gonzalez Inarritu, best original screenplay and best cinematography.

Inarritu, a larger-than-life figure of frizzy hair, regularly wrapped in a scarf, concluded the night’s many moving speeches that called for societal change. Innaritu said he prays his native country finds “a government we deserve’’ and that immigrants to the United States “can be treated with the same dignity and the respect of the ones who came before and [built] this incredible immigrant nation.’’

The ceremony, hosted by Tony Award veteran Neil Patrick Harris, was heavy on song-and-dance to near-Grammy levels, headlined by Lady Gaga lavishly performing “The Hills are Alive’’ from “The Sound of Music’’ with Julie Andrew looking on.

The awards that overwhelmingly went to less-seen independent films, were spread around. All eight of the best-picture nominees won awards, including Britain’s Eddie Redmayne for best actor for his technically nuanced performance as Stephen Hawking in “The Theory of Everything.’’

“Please know this that I am fully aware that I am a lucky, lucky man,’’ said Redmayne. “This belongs to all of the people around the world battling ALS.’’

All of Sunday’s acting winners were first-timers, including best actress winner Julianne Moore, who won for her performance as an academic with early onset Alzheimer’s in “Still Alice.’’