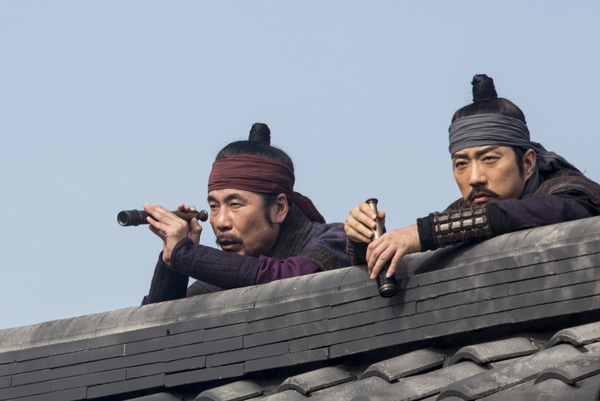 A scene from local comedy flick “Detective K: Secret of the Lost Island,” which topped the local box office during holiday weekend. Provided by the distributor

Local movie “Detective K: Secret of the Lost Island” won the Lunar New Year holiday box office race over the five days from Wednesday to Sunday, according to the state-run Korean Film Council on Monday.

For five days, Kim Sok-yun’s sequel to “Detective K: Secret of the Virtuous Widow” (2011) held onto the top spot, amassing an audience of 3.1 million and making 25 billion won ($22 million) as of Monday morning.

The movie features the detective duo Kim Min (Kim Myung-min) and Seo Pil (Oh Dal-su) - Korean equivalents of Sherlock Holmes and Dr. Watson - who take on a case of fake silver trading during the Joseon Dynasty (1392-1910).

Actress Lee Yeon-hee joined the crew as secretive geisha Hisako who both confounds and offers clues to the mysterious case.

Another noticeable performance at the local box office was Matthew Vaughn’s ambitious spy thriller “Kingsman: The Secret Service” which closely trailed behind in second place.

Despite its rating of 19-and-over, the story about an exclusive spy circle attracted 2.3 million viewers since it opened on Feb. 11, taking in 19.5 billion won.

British actor Colin Firth’s first attempt at an action movie is part of the charm of the movie. The 54-year-old actor, who has established a gentle, romantic image by starring in rom-com films like “Love Actually” (2003) and “Bridget Jone’s Diary” (2001), successfully transforms into a neatly polished secret agent named Harry, who trains newcomer Eggsy (Taron Egerton), who was raised in the slums, to get accepted by his agency.

Family outings over the long holiday helped Yoon Je-kyun’s “Ode To My Father” to re-enter the upper tier of the box office chart. It landed in the third place, three slots up from last week, selling 450,000 tickets over the weekend.

Benedict Cumberbatch’s “The Imitation Game,” chronicling the life of English mathematician and logician Alan Turing, who saved more than 14 million people by breaking a German code during World War II, debuted in fourth place with 406,735 cinemagoers.