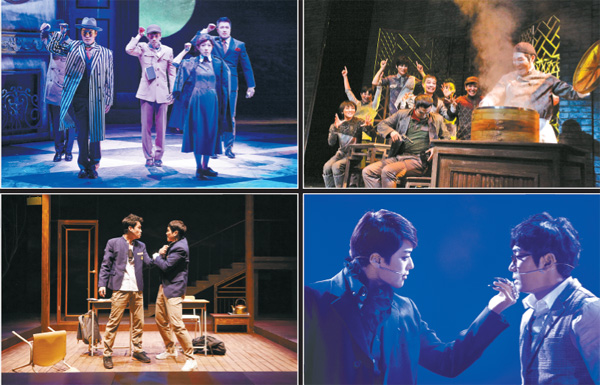 Creative musicals, a name for productions that are entirely made in Korea, have lagged behind large-scale licensed shows in terms of popularity. As more theatergoers have started to claim that creative musicals lack completeness, Korean producers have been trying to make up for the weak points and fill in the gaps between popular shows.

Creative musicals have slowly improved this year even though large-scale licensed musicals like “Robin Hood,” “La Cage aux Folles” and “Jekyll and Hyde” have continued to dominate theaters.

Although it started off in small theaters, locally produced mystery musical “Agatha” recently moved to a larger stage, while the vampire show “Mama, Don’t Cry” has made a much anticipated comeback after a two-year break. “Hero,” a creative musical that centers on the life of independence activist Ahn Jung-geun, will perform in Harbin, China, then will return to Seoul in April with another run to celebrate its Chinese debut. The musical “Desirable Youth” is still being performed at a small theater but has become a steady seller by focusing on its popularity among middle and high school students.

The thriller “Agatha” is the first major musical produced by actor Kim Su-ro and is based on the true story of when British mystery novelist Agatha Christie went missing for 11 days in 1926. The show is a mix of reality and imagination as it portrays Christie’s inner pain and psychological struggles.

Veteran actresses Choi Jung-won and Lee Hye-kyung will alternate in the role of Agatha while the character Roy, who is behind Agatha’s disappearance, will be played alternately by Kim Phil-seok, Kim Jae-bum and Yoon Hyung-ryeol.

The musical started showing at the Grand Theater of the Hongdae Daehangno Art Center in central Seoul on Feb. 11 and will run through May 10. Tickets range from 44,000 won to 99,000 won.

Vampire musical “Mama, Don’t Cry” is also back on the stage after two years off. Genius physicist Professor V uses a time machine to travel back to meet Count Dracula. However, the encounter with Dracula leads to the professor’s downfall. Despite being a creative musical, the show has brought in big audiences due to its rock music numbers, and also because of the great acting by the two lead characters. Song Yong-jin, Kim Ho-young and Seo Kyung-soo alternate in the role of Professor V. Song has already been successful in the part, transforming the naive genius who can’t even talk to a woman into a man who seduces women with his charm after meeting Count Dracula. Actors Ko Young-bin, Lee Dong-ha and Lee Chung-ju take turns playing Dracula.

The show will open at the Petitzel Theatre in Daehangno, central Seoul, on March 10 and will run through May 31. Tickets cost 55,000 won.

The musical “Desirable Youth” is about two teenage male students and their ups and downs at high school, ranging from being bullied at to stealing and even homosexuality. It used to be a play and was turned into a musical due to its huge popularity. The show tries to make viewers feel sympathy toward the real issues that Korean teenagers deal with while portraying the “undesirable” reality of adult life. Actors Kim Dae-hyun and Ju Jin-ha take turns playing I-re, a student who gets called a “homo” at school, while Hyun-shin, a rowdy student who makes trouble wherever he goes, is played alternately by Moon Seong-il and Oh In-ha.

The musical is showing at Dongsoong Arts Center in Daehangno, central Seoul, until March 1 and tickets cost 40,000 won.

After its successful debut in Harbin, China, the show “Hero” will return to Korea in April. The musical tells the story of the life of Ahn Jung-geun, the Korean independence fighter who was executed in 1910 after assassinating Japanese governor Ito Hirobumi in Harbin. Producer Yoon Ho-jin said he believes that “Korean creative musicals are in a period of growth” and added that “many of the great creative musicals of today will trigger a revitalization of the Korean musical industry abroad.”