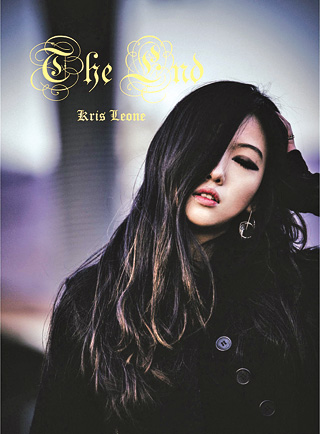 
Kris Leone would sound to listeners like the name of an up-and-coming foreign artist. But looking at her album cover, it’s obvious she’s a Korean girl through and through. It’s interesting to hear this soft, 20-year-old voice take on the modern rock music she has composed, and it’s somewhat surprising how she pulls it off. Her music is reminiscent of Avril Lavigne, but a little lighter.

And there’s no mystery from where her musical talent comes: Leone is the daughter of legendary guitarist Kim Tae-won of Boohwal.

Even though her record is titled “The End,” it’s actually Kris Leone’s first full-length album, released after three years of work.

She made her official debut in 2013, releasing her first single “Into the Skies.”

It appears Leone, who was raised in the Philippines, intended to go global from the start. The album consists of 14 tracks. However, eight songs are actually two different versions of four tracks - one in Korean and one in English - and she sounds comfortable singing in both. In fact, her fans have already begun debating online which versions they like best.