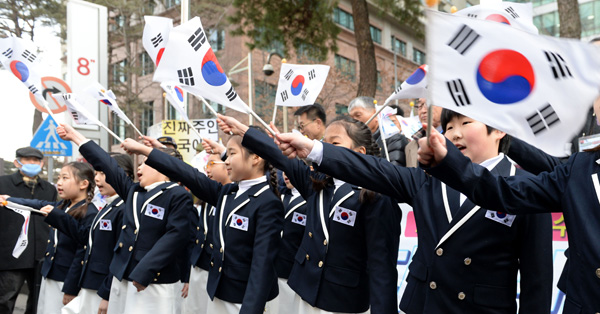 A children’s choir sings a song about Dokdo on Monday at a rally in front of the Japanese Embassy in Seoul to protest a Takeshima Day event in Japan. [NEWSIS]

The Korean Ministry of Foreign Affairs on Monday lodged a complaint with the Japanese Embassy in Seoul condemning the Shinzo Abe administration for sending a senior government official to an annual provincial celebration that is widely considered an affront to the territorial dispute between both nations over the Dokdo islets in the East Sea.

Takeshima is Japan’s name for the Dokdo islets in the East Sea.

This marks the third consecutive year that the Japanese government has sent a high-level government official to the local celebration, a move which the Korean government finds “deeply deplorable,” Foreign Ministry spokesman Noh Kwang-il said.

The Korean Foreign Ministry called on Kenji Kanasugi, an official at the Japanese Embassy in Seoul, on Monday to deliver a strongly worded criticism over the ceremony, which was attended by some 500 officials.

Japan considers Dokdo to be part of its southern Shimane Prefecture.

Korea maintains that the Dokdo islets are its territory historically, geographically and by international law.

The Abe administration has sent a cabinet secretary to the ceremony since 2013, which is interpreted in Seoul as Tokyo’s attempt to exert its claim over Dokdo and exacerbate tensions over the islets.

In a statement on Sunday, Noh called the ceremony a “retrogressive action that denies Japan’s history of aggression on the Korean Peninsula during its imperial era” and raises doubts about Tokyo’s “sincerity toward opening a new chapter in Korea-Japan relations ahead of the 50th anniversary of the normalization of bilateral relations.”

On Sunday and Monday, a group of more than 100 Korean civilians from civic organizations protested the Takeshima Day ceremony in front of the Japanese Embassy in Jongno District, central Seoul.

On Sunday, the Korean Ministry of Education and the Northeast Asian History Foundation said it would distribute Korean and English brochures with maps and photos of Dokdo and the East Sea at schools run by Korean embassies abroad and private international schools to help promote knowledge about the islets.

This is the first time the Korean government is set to distribute such material designed for students overseas.