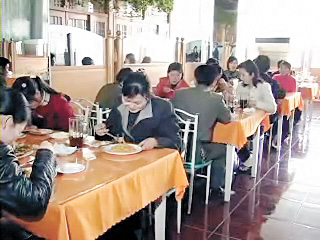 According to the North Korean monthly Choson, prospective chefs at this so-called central cooking school learn how to cook dishes that are slowly gaining popularity among the wealthy, like fondue, pasta and steak, among others.

At the academy, headquartered in Pyongyang with branches in each province, students are said to learn how to make fondue using goat cheese and Taedonggang, a beer brewed by a state-owned company.

Choson explained in its January 2014 edition that this method “accentuates the flavor and aroma” of the fare compared to when it’s prepared in the conventional way that calls for white wine and another type of cheese.

“If you tell your friends that you attend the culinary school, you’re bound to be the most popular guy in the group,” recalled Park Chae-won, a defector.

“I remember learning how to carve a Kimjongilia in a pineapple. It was marvelous,” he added, referring to the flower named after the late leader Kim Jong-il, who died in December 2011.

These developments are in stark contrast to the founding principles of the vocational school, which was established some four decades ago, when Ri Dong-jun, the head instructor at that time, said the training facility would “contribute to the preservation and development of traditional North Korean food.”

Now, however, the classes offered there range from foreign cuisine to sanitary science and food processing.

The school is also believed to be especially popular among young women, many of whom appear to be dazzled by the idea of working at a high-end restaurant after graduation.

Although the main streets in Pyongyang are lined with lavish Italian restaurants, actually landing a job there as a chef requires personal connections - as is the case with most coveted positions in North Korea.

Most graduates of the cooking school go on to work at standard restaurants, schools or on military grounds.

Aside from molding professional cooks, the school also trains waiters and waitresses, called “service workers” or “receptionists” there.

Students who received that kind of training are also going through a phase of globalization, according to Choson, and learn how to serve French cuisine in response to growing demand from foreigners in Pyongyang for work or for travel.

France is one of the few countries in the European Union without official diplomatic ties to the Kim Jong-un regime, but cultural interactions are sometimes allowed - North Korea invites French chefs to the country, for instance.

European countries like France and the Netherlands are said to be the most popular destinations for aspiring wait staff at the cooking school.