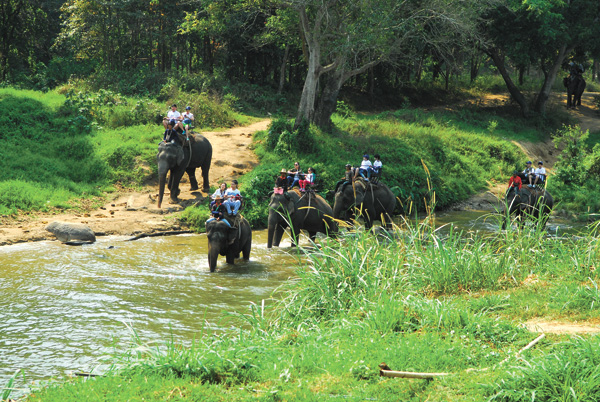 A six-day trip to Thailand provided 13 teenagers the opportunity to reflect on their lives. They also had the chance to ride an elephant for the first time. Provided by Hana Tour

A few days ahead of the Lunar New Year, the Youth Recovery Center, which houses teens who engage in criminal activity and provides counselling and education, arranged a trip to Chiang Mai, Thailand, for 13 of its young tenants.

The six-day trip beginning Feb. 8 was arranged by Cheon Jong-ho, a judge in the Busan Family Court, and supported by the Korean tourism company Hana Tour.

Cheon, who has presided over juvenile court hearings for the past five years, has a reputation for being stern with his young defendants and never hesitating to hand out advice to adolescents who have engaged in criminal activity.

Offending youths are sent to the recovery center, located in the metropolitan city of Gwangju, South Jeolla, following convictions for crimes that range from burglary to assault.

“Most kids have wounded hearts and are from poor families. I wanted them to realize that they should never give up on their lives,” Cheon said, referring to the trip.

“I also wanted the kids to realize through the trip just how precious each person is.”

The trip marked the first time each of the 13 teenagers had traveled abroad. The following narrative was compiled based on their review statements after their return home.

It was Feb. 8, and bitterly cold. I met Mr. Cheon and the other kids in front of the international flight information counter at Gimhae International Airport. All of a sudden, one of the kids burst into tears, saying she couldn’t go on the trip, and finally [ended up leaving]. I heard she was under a lot of pressure because of family problems. The other kids just stood there in silence, looking at their smartphones or around the room.

To make things worse, the flight to Chiang Mai was delayed. It was already past 3 a.m. when we arrived in the city.

On the first day we arrived in Thailand, we went on a zip line, where you cross the river suspended on a cable hung on a tree that’s more than 5 meters (16 feet) tall. Even though I was wearing a harness, my legs were trembling. I kept hesitating to challenge myself.

Finally, I ended up giving up. I was so mad at myself that I started to cry.

Fortunately, however, I finished the other activities afterward, rafting and the elephant ride, thanks to help from my friends. Then I looked back on my past self.

I used to hurt myself every time I failed to control my emotions, and even once pulled a weapon on my teacher at the Youth Recovery Center. Now I feel ashamed.

The next day, we volunteered at a school for ethnic minorities, about an hour away from downtown [Chiang Mai]. The opportunity to care for the unprivileged made me feel like I was starting to become an adult.

During the evening on our second day, what I had worried about most happened. My friend, Min-hyeok, was caught selling cigarettes to me and the other kids. Min-hyeok insisted that he didn’t have any cigarettes, which prompted Mr. Cheon to search our room.

“Do you think I never notice you lying?” he asked.

When Mr. Cheon discovered the cigarettes, Min-hyeok confessed that he had a foreigner buy him a packet of cigarettes at the duty free store. Mr. Cheon reminded us of the purpose of the trip, saying, “You all came on this trip to reflect on our past behavior.”

That night, we were only able to go to bed after writing a two-page letter of reflection.

The incident made me realize that Mr. Cheon has a warm heart and a kind personality, but when we misbehave or act rude, he becomes very strict.

It was the third and fourth day of the trip when we started to open up to one another. I was charged with assault and motorcycle theft in juvenile court. Back then, I could steal a motorcycle with a pair of scissors.

I was caught last year when I tried to steal a motorcycle and ran away, as usual. I assumed that I would easily be released because I was young. But Mr. Cheon referred me to the youth detention center.

During the trip, I remember that I told Mr. Cheon on the bus how much I had realized the importance of freedom during that time and became firm in my determination that I would never go back to that place again.

It was very late at night when we headed to the airport on the last day in Thailand. And when we said our goodbyes, some of us became emotional and started to cry.

Looking back on the past few days, I feel like, in my entire life, I have never had a dream or a goal. There was a time when I was really frustrated, which was difficult to handle on my own.

Mr. Cheon introduced a poem to us called “Don’t Get Too Frustrated,” by Shibata Toyo. The poem still lingers in my mind, which goes: “Really, to call it unhappiness, don’t sigh. Sunlight and zephyrs don’t play favorites. Dreams are seen equally, you know.”

I would say that, although our trip to Thailand is over, our life journey has only just begun.