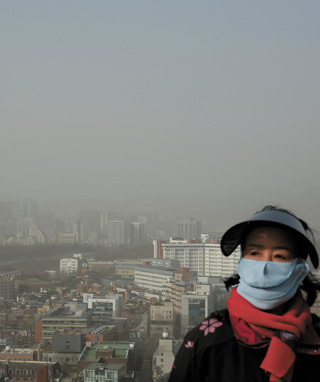 Concentrated yellow dust pollution hangs over Seoul’s skies on Monday as a woman wearing a protective face mask stands by the Fortress Wall of Seoul in Jongno, central Seoul. [NEWSIS]

Korea has been hit by the worst yellow dust pollution in four years, according to the country’s weather office, which issued warnings in Seoul and the surrounding area as well as advisories in other regions.

The Korea Meteorological Administration (KMA) said the density of fine particle pollution in Seoul recorded 1,044 micrograms per cubic meter at 4 a.m. on Monday, the highest after the figure hit 1,493 in November 2011.

It is also fourth highest since the forecast administration began to record yellow dust density in 2002.

Yellow dust, a common seasonal phenomenon in Korea and East Asia, mostly originates in the deserts and arid regions of Mongolia and northern China.

Dry soil particles are then carried over by prevailing winds and can combine with manmade carcinogens from industrial activity and moisture in the air along the way.

This fine particulate matter is made up of coarse particles less than 10 micrometers in diameter (PM-10), which are small enough to be inhaled into the lungs and can pose a myriad of public health concerns.

The KMA issued yellow dust warnings in Seoul, Gyeonggi and Incheon on Sunday night, but toned them down to advisories as of 1 p.m. on Monday.

This is the first time in four years Seoul has come under a yellow dust warning since November 2011. Coupled with pollutants generated domestically, the capital city also came under an ultrafine particle advisory as of 1 a.m. Monday, the first time this year.

But this time, the yellow dust is not just strong but has also greatly affected the country.

Most regions came under a yellow dust advisory from Sunday to Monday, and yellow dust density in most major cities stayed at a level considered “very bad” - ranging from 400 to 799 micrograms per cubic meter - until Monday afternoon.

“Serious yellow dust is now observed all over the country,” the KMA forecast read on Monday afternoon. “The only areas that are not under a yellow dust advisory are Busan and the southern portion of South Gyeongsang.”

KMA guidelines advise people to close their windows and stay indoors if possible, and to wear protective glasses and masks when going out.

The administration also recommends that the elderly and infirm or those who suffer from respiratory diseases remain inside.

The KMA believes this yellow dust cloud originated in southern Mongolia and northern China on Friday and Saturday.

Soil in the area was more exposed due to less snowfall this year, it added, which created favorable conditions for yellow dust clouds to form and move across the continent.

The KMA forecast that the yellow dust would subside by late afternoon on Monday.

However, it advised those sensitive to air pollution to pay special attention, as fine particulate matter will remain in some parts of the country until Tuesday.

Though the country was hit by one of the worst dust clouds in recent years, the KMA announced on Monday its long term forecast, in which it told that Korea will actually see fewer days with yellow dust this spring than the average from previous years.

That dust, it added, is likely only to hit in early March.