Hansae gets first place in the regular season again

Hansae gets first place in the regular season again 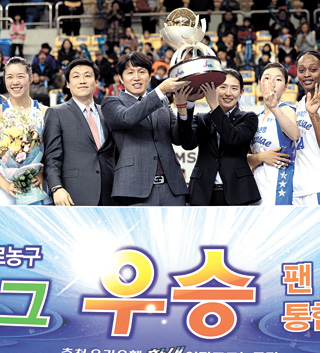 Chuncheon Woori Bank Hansae has come in first place in the regular season of the Women’s Korean Basketball League (WKBL) for the third consecutive season and Coach Wi Sung-woo and the players already have their eye on the playoff title.

Hansae achieved beat Guri KDB Life Winnus 74-71 at Hoban Gymnasium in Chuncheon, Gangwon, on Monday. With a record of 26 wins and 5 losses, Hansae will take the regular season title regardless of the scores in its remaining four matches. It is the club’s eighth regular season title.

Fans are once again praising the leadership of Wi, who took the helm in 2012. Before the 43-year-old was coach, Hansae was the WKBL’s worst team for four straight seasons. But in his debut season, the new coach led the club to win the regular season and championship series.

Players said that Coach Wi has changed his coaching style this season. In the past, he was renowned for harsh training. But this time, Wi has been softer, according to players.

“It is true that the head coach has changed a lot,” Hansae guard Park Hye-jin told Ilgan Sports, an affiliate of Korea JoongAng Daily. “In the first year, the players didn’t like the head coach, but now we take pride in the fact that we train harder than any other WKBL team.”

But Wi attributes the team’s success to its veterans. “I especially thank Lim, who stepped forward to show her fighting spirit,” Wi said. “Kang also serves as a backup for Yang, but she did her job well from the back.”