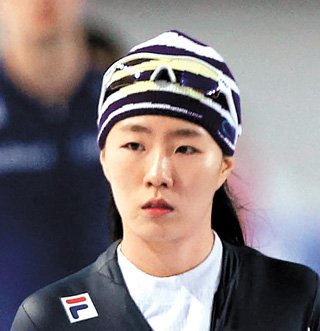 Two-time Olympic speed skating gold medalist Lee Sang-hwa probably will not compete for the remainder of the season to rest her ailing knee.

According to Brion Co., her management agency, Lee decided not to participate in the 96th National Winter Sports Festival that starts today and is likely to sit out the International Skating Union (ISU) World Cup Speed Skating Final in Erfurt, Germany, that begins March 21.

“For the National Winter Sports Festival, Lee will submit written notice explaining her decision to the organizers, and if that is accepted, she will not enter,” said an official from Brion.

“For the international competitions, coaching staff will make the final call, but it isn’t likely Lee will participate.”

Lee, who turns 26 today, was scheduled to race in the 1,000 meters at the women’s senior division at the National Winter Sports Festival on Thursday and the team pursuit event on Friday, representing the city of Seoul.

Lee won gold medals at 500 meters in the Sochi Winter Olympics a year ago and the 2010 Winter Games in Vancouver.

In the three months after Sochi, she kept up a whirlwind schedule of appearances and celebration events before getting back on the ice at the Taereung National Training Center.

The tight schedule without a rest gave rise to speculation that Lee may have strained her ailing knees. It has been reported there is water on her left knee, while the right shows symptoms of varicose veins.

But instead of surgery, she instead decided on rehabilitation treatments and prepared for this season. In her latest interview with JoongAng Ilbo in November, Lee said: “My goal for this season is to complete all events, instead of winning them.”

But the season so far has got gone well for Lee, who holds the world record of 36.36 seconds in the 500 meters.

Lee finished fifth in the first of two 500-meter races at the ISU World Cup in Heerenveen, the Netherlands, on Feb. 7, the first time in 38 months that she failed to medal.

At the World Single Distance Championships in the same city on Feb. 14, Lee ranked fifth after two 500-meter races with a combined time of 76.004 seconds.

It was the first time since 2008 that she failed to stand on the podium at this event.

As concerns were increasing over the condition of Lee’s knees, Korean national team head coach Eric Bouwman recently said Lee would not require surgery and attributed her performance drop-off to fatigue.

“We are taking the long view and Lee will take a rest to allow her to fully recover,” said a Brion official.