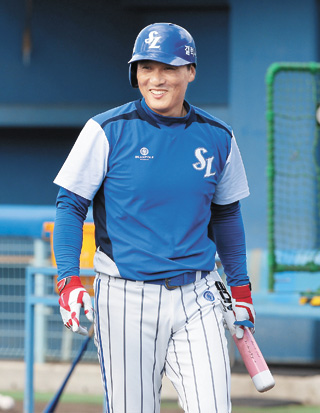 OKINAWA, Japan - In 2002 at the Samsung Lions spring training camp in Arizona, batting coach Park Heung-sik was looking closely at a young left-handed hitter, thinking he might be better than Lee Seung-yuop was as a rookie.

That young batter was Choi Hyoung-woo, the current cleanup hitter for the Lions.

Thirteen years later at the Lions’ spring training camp in Okinawa, Japan, it’s Koo Ja-wook who is considered the next “next Lee.”

Yet Lee, who will turn 39 in August, is still with the team and likely will be in the lineup along with both Choi and Koo this year. The aging slugger helps to protect Choi in the batting order and might find himself competing with Koo for the designated hitter slot. 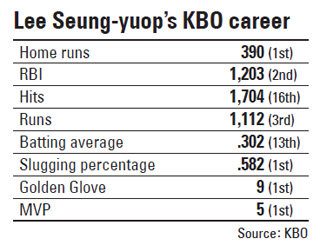 Participating in his 21st spring training camp this year, Lee says that while he gets more tired than he used to, he still feels happy.

“Young players might call me grandpa behind my back, but I still like playing with them,” he said after a training session Sunday at Akama Baseball Stadium in Okinawa.

Formerly with the Chiba Lotte Marines and Orix Buffaloes, Lee said he sometimes envies young players like Koo, who have their whole careers ahead of them.

“In the past, I was under a lot of pressure to perform well and sometimes the huge attention from fans and media was tough,” said the Korea Baseball Organization (KBO) all-time home run leader with 390. “But looking back, those days were a blessing.”

Nicknamed the “People’s Hitter,” Lee is more than KBO legend. The Lions’ venerable star also has shone brightly in international competition, playing pivotal roles in Korea’s gold medals at the 2002 Asian Games in Busan and 2008 Olympic Games in Beijing.

“In the past, I felt so much pressure because of my nickname since there were many older players who were better than me,” said Lee. “But later I recognized it was really an honor. I want to buy dinner for whoever first called me the People’s Hitter.”

Despite his success, there also were some painful times in his career. In 2008, Lee was sent to the minor roster by the Yomiuri Giants due to injury and poor performance. When his son asked him why he was not on television, Lee said, he felt stress because he thought he was not being the kind of father that would make his child proud.

The five-time KBO MVP still thinks about his children when he doesn’t play well.

After an off year in 2013, he changed his batting stance and rebounded last season to hit .308 with 32 home runs.

Lee said he adjusts his swing according to baseball trends and game situations. Instead of a power hitter who aims for the fences, Lee now strives to make solid contact. The nine-time Golden Glove winner said that even in spring training, he never approaches an at-bat trying to hit a home run.

“Because each pitcher’s style and pitch repertoire is different, you can’t be successful by sticking to one consistent swing like what you would do in golf,” he said. “Probably this batting stance will be my last.”

In his 20s, Lee said, he always tried to play harder because he wanted to be a “good son” to his parents. Today, he wants to be a “good father” to his two sons. Now on the verge of 40, he is not just concerned with his own success, but looking to contribute to society as a whole.

Lee’s commitment to making his family proud is a thread that runs through his career.

“Don’t you think that’s the fun of living and happiness?” he asked.

After this year, Lee will be a free agent who can sign with another club, but the eight-time KBO All-Star says the 2015 season might be his last.

Because baseball led him to be a good son and father, Lee now plans to find a way to give back to the game he loves and the fans who have supported him.