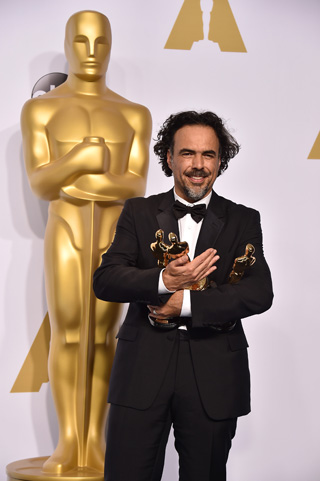 MEXICO CITY - Mexicans rejoiced at the Oscar victories of native son Alejandro Gonzalez Inarritu on Monday, and embraced remarks he made that were widely seen as a criticism of their government.

Inarritu responded to his best picture award for “Birdman’’ by expressing hope that Mexico “can find and build the government that we deserve.’’ National pride over the director’s victory was so great that even the country’s ruling party sent congratulations, despite the seeming swipe.

There was more uncertainty over actor Sean Penn’s quip as he announced the award, asking, “Who gave this son of a bitch his green card?’’

Inarritu said it was a joke between longtime friends, and many Mexicans took it that way. However, some said they found it offensive.

The Mexican director’s comment about the government was interpreted as criticism of President Enrique Pena Nieto’s administration, which critics have targeted for its handling of the case of 43 missing college students, as well as alleged conflicts of interest.

On Monday morning, the top Twitter trend in Mexico was the hashtag: #ElGobiernoQueMerecemos, or #TheGovernmentWeDeserve.

Pena Nieto sent a congratulatory note to Inarritu on Sunday evening through his official Twitter account. But his government did not immediately respond to a request from The Associated Press on Monday for comment on the director’s remarks.

The ruling Institutional Revolutionary Party said through its Twitter account: “Sharing the Mexican pride, it’s a fact that more than deserving it, we are building a better government. Congratulations #GonzalezInarritu.’’

For some analysts, the director’s comment is a vision many share. “The majority of Mexicans are not satisfied with the kind of government that we have,’’ Sergio Aguayo, analyst and academic at the Colegio de Mexico, said Monday on MVS Radio. AP